Making the good better - A vision for Formula One: Step Six 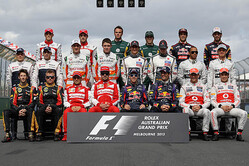 Views on Formula One vary, but I don't think I've ever heard anyone get on a soap box and argue that these cars shouldn't be driven by the best drivers in the world. Equally I've not met anyone in Formula One who doesn't want the drivers to at least be perceived as the world's best drivers.

Here we are lucky because most things in life need a bit of getting used to, even if you are ultra-talented, and Formula One offers no real opportunity for the up and coming to learn, so today's crop of drivers probably are the world's best at driving Formula One cars. What's not clear (I'll leave the reader to judge) is that if say twenty new faces all got a couple of weeks experience, testing as much as possible, including a race or two, how would they stack up against the incumbents. What would the results look like, new faces versus old?

To answer this in a speculative manner and come up with a picture that reflects the likely outcome is the purpose of this article.

First one must understand that sports achievers have two aspects to their skills, natural talent on one hand and training or practice on the other. This is covered well in Matthew Syed's book 'Bounce'. In this is it is argued that give a reasonably skilled person 10,000 hours targeted practice at a sport and they'll get to the top, provided they have the mind-set to practice with dedication. Now this might be feasible for table tennis but it certainly isn't for motor racing. A GP2 driver has just 70 odd hours per year, a karter perhaps 250 hours, either way they'll die from old age before they accumulate 10,000 hours.

Let's take a look at three sports: Premier League football, Olympic cycling, and motor racing. The UK has a population of about 60m, with a lifespan of about 75 years, so each year about 800,000 new people are available to choose or be selected for a new career as the same number leave. Now here we are talking about a male sport (F1), sorry but that's the way it is as the cars are so physical to drive, so half of these (the girls) are realistically unavailable. This means that we have a 400,000 annual pool, of these there will be a normal distribution of any given talent, but let's ignore talent for now.

Premier League Football: Number of clubs is twenty, with squads of about thirty players each. So 20x30=600 players, 42% of which are British (say 250). Lifetime in the Premier League for each player, say, five years on average, so each year one fifth of these 250 enter and one fifth leave i.e. 50 new places a year are on offer each year. Thus without any other factors a boy has a 50/400,000 chance of becoming a Premier League player, i.e. one in 8,000.

Cycling: There are about fifty Olympic cyclists in the 'squad' across all disciplines. The Olympics only occur every four years, and the 'lifespan' of an Olympic cyclist is about two Olympics (8 years), so 50 divided by 8, i.e. about 6 riders come or go each year. It's open to both male and females. On the same logic as for the footballers, a child has a 6/800,000 chance of becoming an Olympic cyclist, i.e. one in 132,000, or if the child is a boy it's a one in 66,000 chance.

Motor racing (F1): There are 22 F1 drivers, three or four of which tend to be British, let's be generous and say F1 could handle five British drivers and that they average a five year F1 career, so that's one slot per year. The demands are such that only men need apply (although I'd love to be proved wrong). So here a boy has a 1 in 400,000 chance of being a F1 driver.

Summary: Taking a boy at random and with no other considerations, the odds look something like this:

Well on the face of it, Formula One is the hardest to get into by far and one might think that only superstar sportsmen are going to get there. Let's now go on and consider how to improve the chances in each sport. Clearly money can't improve inherent ability, but it certainly can improve the training so that you may not be talented per se, but you'll be well trained.