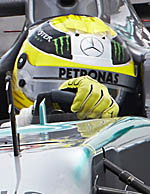 While it remains unseasonably cool, the good news is that the sky is clear and it is not raining.

Following yesterday’s washed-out opening session, things were much improved in the afternoon, with most drivers getting in some serious laps. All except Felipe Massa who had his third successive practice crash in as many GP weekends.

Nico Rosberg led the way, ahead of 2012 winner Mark Webber and teammate Sebastian Vettel, with the Toro Rossos and Force Indias in close attendance.

Fifth placed Lewis Hamilton is unhappy with his car, while Jenson Button claims it will take a “miracle” to finish on the podium.

The teams didn’t get the chance to run their numerous updates until the second session, while Lotus ran its ‘Device’ (passive DRS) for the first time this year – a decision on whether it will be used in qualifying and the race has yet to be made.

Hulkenberg, who complained yesterday that even with DRS he was unable to pass a Marussia, is first out, followed by Massa, Gutierrez, Alonso, Raikkonen, Sutil and Bianchi. All are on hards (prime).

While most return to the pits after their installation lap, Raikkonen stays out to post the first time of the day (1:34.367). As Hamilton (on options) complains of a “huge vibration already”, Grosjean, who didn’t run the passive DRS yesterday, and doesn’t have it now, posts 41.601.

Hamilton really struggling for grip coming out of the Beckets complex. A big slide also for Grosjean.

Hamilton is told that he’s losing out to his teammate at Copse, Rosberg taking what used to be the first corner in fifth.

Massa, who missed much of yesterday’s running, goes third with a 34.011. The Brazilian needs a good result here this weekend. After a strong start to the season, remember when he was out-performing Alonso, he seems to have dropped off in recent races.

Perez pulls off to the side of the track with a badly damaged left-rear tyre. As a result of the (tyre) debris on track the session is red flagged. The tyre, which “exploded” according to the Mexican, has done a lot of damage to the left-rear of the car.

The session restarts just a few minutes later at 10:20, however in the McLaren garage there is frantic activity as the team, overseen by Martin Whitmarsh and Sam Michael investigate the damage to Perez’ car.

In the McLaren garage the team is changing the floor on Perez’ car. The team says there is also “extensive damage” to the rear of the car and top body. There could be serious repercussions as a result of this. While safety is clearly the main issue, there is definitely something going on behind the scenes in terms of the FIA, Pirelli and Michelin.

Ricciardo, also in line for the Red Bull job, goes second (33.047), only to lose out when Toro Rosso teammate Vergne posts 32.580. Sutil and di Resta still an impressive fourth and fifth.

At half-time, Hamilton and Rosberg are 18th and 19th, both over 4s off the pace.

Rare on a Saturday, Vettel’s car is smothered in flo-viz. The German is currently 20th, just behind the Mercedes duo. The Ferraris are 8th and 9th, Alonso the quicker of the pair.

A 32.317 sees Hamilton go quickest, around 0.6s quicker than his best time of Friday.

As Bottas goes cross-country, Button posts PBs in all three sectors, however he remains tenth over 1.4s off the pace.