Kubica: Too early to talk about the future 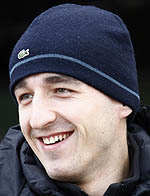 Ahead of his DTM test with Mercedes, Robert Kubica insists that it is far too early to start making predictions regarding his future.

The Pole, who sustained multiple injuries in an accident whilst rallying in early 2011, has taken part in various national rallies during the past few months in preparation for a possible return to racing.

Tomorrow's test drive with Mercedes-Benz in the world's most popular touring car series represents his first proper outing on a race track under actual test conditions since his time in F1.

"I'm really pleased that Mercedes-Benz is giving me the opportunity to test their DTM car and I'm looking forward to getting acclimatised to a race car again," said the Pole. "It will be in proper testing conditions, on a permanent circuit, and it's important because the DTM Mercedes AMG C-Coupé has good levels of downforce.

"It's still too early to make any statements about my future because of this one test," he added. "I'm just looking forward to tomorrow and we'll see what happens after that."

Kubica was a member of the Mercedes motor racing family at the start of his career; during the 2004 season, he lined up in a Dallara-Mercedes on the Formula 3 Euro Series grid for Mucke Motorsport, taking three podiums and 53 points. That same year, he took second place on the podium in the prestigious Formula 3 Grand Prix at Macau's Guia street circuit using Mercedes power.