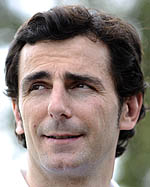 At the opening of its media event in Madonna di Campiglio, Ferrari has confirmed the date of the launch of its 2013 contender and the identity of a new development driver.

The Maranello squad will unveil the 2013 car at its Maranello HQ on February 1, the same day as Force India launches its car at its Silverstone HQ.

Meanwhile, in a surprise move, the Italian team has announced Pedro de la Rosa as its development driver, a role which will see the Spanish veteran spend countless hours in the team's simulator.

It's a canny move by the Maranello outfit, for other than his recent on track experience with HRT and Sauber, the Spaniard spent eight years as test driver with McLaren and was also test driver with Pirelli ahead of its return to the sport.

Interestingly, de la Rosa, a former chairman of the GPDA, was also involved in the 2007 Spygate saga, the Spaniard understood to have sent emails to Fernando Alonso - then at McLaren now with Ferrari - and Mike Coughlan regarding Ferrari's car set-up. As it happens, Pat Fry, the Italian team's Chassis Director was the Woking team's Chief Engineer of Race Development at the time of the scandal.

“We decided to add de la Rosa to our group of drivers mainly to strengthen one area, namely work in the simulator, which with the current regulations regarding testing, is becoming ever more important,” said Stefano Domenicali, explaining the move. “Pedro therefore joins a group of drivers that already includes Davide Rigon, Marc Gene, Andrea Bertolini and Jules Bianchi. Regarding the latter, who is also part of the FDA, we are currently trying to find him a role in Formula 1 and when we have some news, we will let you know.”

“It is amazingly motivating to be working for a team like Ferrari," said de la Rosa, "not just because of what it represents in the history of Formula 1 and motoring in general, but also because it will be a completely new and very stimulating experience for me.

“I really hope I can get to work as soon as possible and to help in the development of the car. I am happy to be collaborating with Fernando again and also to be working with Felipe. There’s not much time until Australia, but there is a lot to do and I am available to help the team from right now.”

The first pre-season test, at Jerez, gets underway on 5 February.