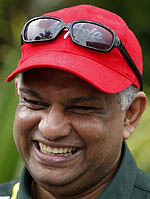 Whilst the Formula One media is devoting most of its attention to the title battle between Sebastian Vettel and Fernando Alonso, the real scrap can be found at the back of the grid. In fact, few of the teams in F1 need to make up a place in the standings as much as Caterham. The team lies in eleventh place and only has two races remaining in which to improve its position otherwise its prize money will fall to a fixed fee of £6.3m ($10m) from the estimated £22.9m ($36.6m) it received for finishing tenth last year. Caterham needs to do whatever it can to regain tenth place from Marussia and an article in Saturday's Express by Pitpass' business editor Christian Sylt reveals that it received a financial boost at the eleventh hour.

The boost comes in the form of a £5.7m loan from Malaysian investment bank CIMB which earlier this year was named as one of the backers of the stalled £6.3bn ($10bn) flotation of F1 itself. It gave the loan to Caterham on 18 September and it is secured on the team's factory in Leafield, Oxfordshire. This means that if the team fails to repay the money it could lose its base of operations.

Caterham is owned by a group of Malaysian investors headed by airline mogul Tony Fernandes. They are also shareholders in AirAsia, Malaysia Airlines, the Queens Park Rangers football team and the Caterham car company, the historic British manufacturer which the F1 team is named after.

For a backmarker like Caterham £5.7m is a lot of money and it needs the boost now more than ever before. This season has been Caterham's worst since it joined F1 in 2010 as it has finished tenth for the past two years running which qualified it for a share of the sport's profits rather than the £6.3m fixed fee.

Despite being eligible for a share of F1's profits Caterham has not scored a point and this is something that new team principal Cyril Abiteboul wants to change. Earlier this week Abiteboul took over the post from Fernandes who said "it was right for us to lead the team initially and set a template of how it should be. That vision is now set." Abiteboul added "we have big challenges ahead of us but the shareholders are committed and behind us to help us take significant steps forward over the coming years."

Fernandes and his business partners have spent more money, without success, than the owners of any other team in the history of F1. According to F1's industry monitor Formula Money Caterham's owners have invested an estimated £77.2m ($123.4m) in the team to race in 56 Grands Prix so far. External sponsorship only provides around £18.4m ($29.4m) of its £61.2m ($97.9m) budget this year with its biggest-paying backer being the US conglomerate GE.