Raikkonen ensures his team gets the message 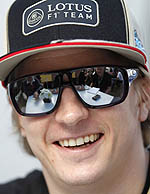 On the back of his demand to be left alone whilst driving, Abu Dhabi Grand Prix winner Kimi Raikkonen has bought T-shirts for every member of his Lotus team, each bearing the words: "Leave me alone, I know what I'm doing"

In a race that already had fans on the edge of their seats, there was further entertainment courtesy of Raikkonen's growing frustration with his engineer.

Following Lewis Hamilton's retirement from the race, advised that Fernando Alonso was 5s behind and that he would be kept updated on the gap, the Finn clearly wasn't interested. "Leave me alone!" was the angry response. "I know what I'm doing".

Later in the race, during the second safety car period, told that he needed keep working all four tyres in order to maintain the temperature, the response was equally forthright: "Yes, yes, yes, I'm doing all that," shouted the Finn. "You don't have to remind me every second."

When asked about the radio messages later, and how distracting he found them, Raikkonen admitted: "It's a normal thing. It's the same with all the teams. For sure, they are just trying to help but if you keep saying the same things two times a minute... I'm not so stupid that I cannot remember what I'm doing. It's a normal thing, they are just trying to help. I know what I'm doing.

"I will ask for help if I need it," he continued. "It's not the first time and it won't be the last time. It's been many times with other teams also but they are all there to help you and try to put you in the best position. Different people like different things."

It has now been revealed that as the team prepares to head to Austin for the penultimate race of the season, a consignment of 500 T-shirts arrived at its Enstone HQ earlier this week, each adorned with F1's new catchphrase on the front.

In his preview to the Austin race, team boss Eric Boullier paid tribute to the Finn. "Kimi has certainly made his mark and shown that he's back in Formula One and back at his best form," he said. "Having him back getting podiums and a win is great for him, great for the team and great for the fans. Moreover, 'Leave me alone, I know what I'm doing' has already become a Formula One classic."