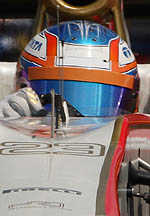 After the two days practice sessions at the Indian Grand Prix, HRT Formula 1 Team held high expectations for today's race, but the seventeenth event of the season didn't go as well as expected. Issues with overheating of the brakes, which was thought to be something of the past, resurfaced and impeded Narain Karthikeyan from finishing above 21st in front of his home crowd and Pedro de la Rosa from finishing the Grand Prix.

Despite the fact that Karthikeyan and de la Rosa got off to good starts, the Spanish driver moving up to seventeenth, the problem was detected on the third lap and both drivers had to give away ground to control the temperature of the brakes and complete the 60 laps. Karthikeyan, with a very good race pace on the hard tyres, finished in 21st whilst de la Rosa's brakes failed with fifteen laps to go and was unable to finish the race.

Pedro de la Rosa: "It's a shame that I had to retire because the car was running well on the hard tyres but, with no warning, the brakes failed. This circuit is very demanding with three consecutive hard braking corners and with the high temperatures this can happen but the important thing is that I'm fine and the car isn't too damaged for Abu Dhabi. We have to understand why this failure occurred and fix it because Abu Dhabi is another challenging circuit for the brakes."

Narain Karthikeyan: "I got off to a good start but had an incident on the first corner and lost a chunk of my front wing. The damage wasn't too severe but we had problems with the balance of the car from then on. But the greatest problem was the overheating of the brakes. They warned me on the radio that I had to look after them because we had to make it to the end. And we did that. Today we got the most out of what we had and I'm happy to have finished my home race."

Luis Perez-Sala, Team Principal: "It was a tough race, especially at the beginning, because of the overheating of the brakes. Something which we weren't expecting to have at this circuit. From the start we were running to the limit temperature-wise and we had to reduce our pace a bit. We improved from then on and maintained our pace but towards the end Pedro had a brake failure and was unable to finish. Narain also had a complicated race but at least was able to finish in front of his home fans and that's the most positive thing."