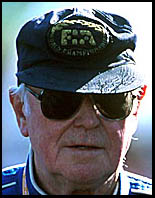 Professor Sid Watkins, who served as the FIA's Formula One Safety and Medical Delegate for twenty six years, has died.

The 'Prof', a lifelong friend of Bernie Ecclestone - he knew his father - was key in the modernisation of medical standards in Formula One and even after his retirement continued to serve as President of the FIA Institute for Motor Sport Safety until late 2011 when he stepped down, though he continued in an honorary role.

Graduating as a Doctor of Medicine from the University of Liverpool in 1956, during which time he had carried out research on the effects of heat stress on performance, something that would prove useful in his work with in motor sport, he served with the Royal Army Medical Corps in West Africa for four years. During this time he took part in the West African Rally, driving a Ford Zodiac, his only known outing as a racer.

Returning to the UK in 1958 to specialize in neurosurgery at the Radcliffe Infirmary in Oxford he attended his first motorsport event in a medical capacity at a kart race at Brands Hatch in 1961. He subsequently spent much of his free time as a race doctor at Silverstone.

Even whilst working as professor of neurosurgery at the State University of New York, he continued his interest in motorsport at Watkins Glen, providing his own equipment due to the lack of supplies provided by officials.

In 1970 he returned to Britain to act as head of neurosurgery at the London Hospital, later being invited to join the RAC's medical panel.

In 1978, Bernie Ecclestone, then chief executive of the Formula One Constructors Association, invited Watkins to become Formula One's official race doctor while continuing his role as a neurosurgeon in London. Although paid a salary of around £35,000, Watkins had to pay his own air fairs, hotel bills, rental cars and all incidental expenses

Later that same year, Watkins was at Monza for the Italian Grand Prix in which Ronnie Peterson was to perish following a startline crash. Arriving at the scene his way was blocked by policemen and this delay, combined with the additional fifteen minute delay in the arrival of an ambulance led to him demanding Ecclestone provide better safety equipment at all races including an anaesthetist, a medical car and a medical helicopter. Most of this was in place at the very next race.

The Prof, who was elected president of FISA's Medical Commission in 1981 played a major role in improving not only medical treatment in the sport but also improving safety, However, it remained a dark period for the sport what with the deaths of Gilles Villeneuve and Riccardo Paletti.

In 1992, he founded the Brain and Spine Foundation, a charity aimed at improving "the prevention, treatment and care of people affected by disorders of the brain and spine".

In 1994 he came to the attention of the wider public over the weekend of the infamous San Marino Grand Prix. Having tried to save Roland Ratzenberger following the Austrian's crash in qualifying, the following day millions watched on their TVs as the Prof attempted to save Ayrton Senna, the two having become close friends.

Following Ratzenberger's fatal crash, and another horrendous accident on the Friday involving Rubens Barrichello, a dark cloud hovered over the Italian track. Watkins was to later reveal in his book, Life at the Limit, that before the infamous race he had attempted to talk Senna out of participating and to walk away from the sport.

"Why don't you give it up altogether?" he asked the Brazilian legend. "What else do you need to do? You have been world champion three times, you are obviously the quickest driver. Give it up and let's go fishing".

"Sid, there are certain things over which we have no control," Senna replied. "I cannot quit, I have to go on."

Watkins was to later write that he saw the Brazilian's soul depart as he performed open heart surgery on him in the moments after the crash, and in an interview with Pitpass editor Chris Balfe, several years later, readily admitted that he "loved" the legendary driver.

In the wake of the San Marino weekend, Watkins, along with Max Mosley, was at the forefront in terms of further improving safety standards in F1. Having set up the FIA Expert Advisory Safety Committee in 1994 he later also set up a rally research group and karting research group, all three being brought together in 2004 as the FIA Institute for Motor Sport Safety, with the Prof as president.

Awarded the Mario Andretti Award for Medical Excellence in 1996, in 2002, Watkins was made a member of the Order of the British Empire, while the University of Liverpool presented him with an honorary doctorate in 2004.