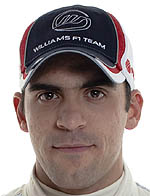 Pastor Maldonado will take a ten place grid penalty no matter what happens in qualifying this weekend. The Williams driver was handed two penalties after the Belgian Grand Prix, one for jumping the start and another for an avoidable collision which ultimately ended his race.

The Venezuelan's penalties come on top of a one-race ban for Romain Grosjean, who stewards deemed responsible for trigrering the first corner pile up which eliminated Lewis Hamilton, Sergio Perez and Fernando Alonso. It was a penalty most in the paddock agreed with, while some suggested it has been a long time coming.

However Maldonado, who has received no fewer than seven penalties for driving incidents this season, believes stewards are stricter in 2012 than they were in 2011.

"This year they seem to be more hard; not only for me but for everyone," he said. "It seems to be that they like no contact in the race or anything close to the limit.

"We need to respect that," he continued. "I think that's one change for this year, because even last year they were not so hard on that."

After a breakthrough win in Spain, Maldonado has failed to score a point since, though has been in the spotlight for his driving on more than one occasion. In Valencia he was involved in an incident with Hamilton, while at the British Grand Prix he tagged Perez' Sauber, the pair having also come together in practice for the Monaco race.

"Here in the team there are no big problems," he added, "but we've missed a lot of points this season and it's time to do well and time to recover.
"The first thing is to be away from the stewards and after that I will do my racing and my races."

When asked whether he felt his seat was safe Maldonado was uncertain. "We don't know. We need to wait."

Believed to bring in more than $30million in sponsorship to the team it seems Maldonado's position is not under threat despite his seemingly endless run of penalties. Indeed one insider suggested that the Venezuelan could crash out of every Grand Prix at the first corner and still be worth keeping.

However, by banning Grosjean for a race, the stewards have now set a precedent, all drivers, not just Maldonado, will need to be on their best behaviour. "We need to adapt ourselves to the stewards and that's it," he said. "The best result is to not be in the stewards' room."