Domenicali: Alonso and Vettel could co-exist at Ferrari 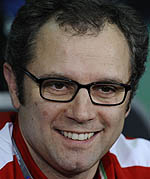 The interview, which was carried out by Bianca Garloff and Ralf Bach, took place in Canada and is published in the current issues of Sport Bild and Auto Bild.

Asked about the possibility of Vettel joining the Italian team at some stage in his career, Ecclestone said: "All drivers want to drive for Ferrari at least once in their career, don't they?

"I wouldn't advise him to, as he's still too young!" he adds. "Usually, a driver ends his career at Ferrari, therefore it could happen one day."

When asked about the possibility of the German joining the team whilst Alonso is still in residence, Ecclestone adds: "That wouldn't be a problem: both are drivers who are always looking for a new challenge and to be in the same team would be a new and big challenge. They would both think they can bear the other one, as they are sure of themselves and Stefano would do what was required to so that they were treated equally. It would be a case of doing what I did at Brabham in 1979 with Niki Lauda and Nelson Piquet. I told them, "guys it's simple: whichever one of you is quickest is the team number 1."

"I think they are both intelligent guys and they could easily coexist together," adds Domenicali.

As for Ferrari's other current driver, Felipe Massa, Ecclestone and Domenicali both feel the Brazilian has been harshly treated by the media.

"To me it's obvious,"£ says Ecclestone. "Felipe is very talented and there's not much to add…"

"Correct, I agree completely," says Domenicali. "There is a lot of pressure, but I remember well in 2008, when Felipe had problems in the first two races and then fought right to the end for the title. This year, it's not that different: after Felipe drove a great race in Monaco, the same journalists who had been criticising him, began to ask me why he did not yet have a contract for next year. One thing is certain: as Team Principal, I have always encouraged and protected him."

"The media exert pressure and try to influence decisions, not just in Italy," says Ecclestone. "Some drivers worry a lot less about these things, others more so: Felipe is a sensible lad. It is not very correct of some of the media when you see how they want to destabilise him."

Another famous F1 name that one might presume appears on Ferrari's 'want list' is Adrian Newey, whose cars have won numerous titles over the years.

"Everyone wants to have Newey," admits Ecclestone, "but he would also need to adapt to the team."

"Newey is definitely one of the best engineers in Formula 1, but Bernie is right," adds Domenicali, "in this sport teamwork is the most important thing and in Ferrari, we have a great team, made up of people who are progressing together and who can now show what they are capable of."

When asked to choose their favourite drivers, Ecclestone's reply is instant: "Jochen Rindt," he says, "we were very close friends."

"John Surtees, because he was the only man to have won world championships with two and four wheels," adds Domenicali. "I also admired Gilles Villeneuve for the passion he brought and Michael Schumacher, for winning seven world titles."

"Villeneuve was a fighter and the people loved him," admits Ecclestone. "There are two types of driver: those admired for their style and those who have enjoyed a lot of success. If you ask me who is the best driver in Formula 1, I will say Alain Prost. Was he a favourite with the general public? No, he was a bit like Fangio: both did what had to be done to win."