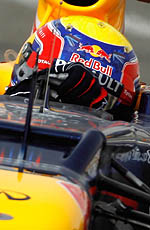 Like something out of a George Lucas film the saga surrounding Formula One's technical regulations continues.

Ahead of yesterday's Monaco Grand Prix there were fears of a post-race protest against eventual winners Red Bull, some teams unhappy with the reigning champion's interpretations of rules governing exclusion areas on the floor of the car.

The exclusion zone ahead of the rear wheels is designed to prevent teams channelling air underneath the car in order to gain more downforce, effectively preventing teams from using exhaust blown differs as seen last year. According to Ross Brawn however some teams, including McLaren, are still running them.

"The FIA probably told you all that we weren't going to have exhaust blown diffusers anymore, we thought we weren't going to have them, and several cars have got them," Brawn said during the height of the 'double DRS' saga. He went on to claim that teams run all developments which may be borderline past the FIA ahead of time so as to prevent nasty surprises should a protest be lodged.

"It's good manners, and it's some security because you don't want to give the FIA a shock," he explained. "If someone goes to the FIA technical group and says 'we've seen this, we don't like it' you don't want when they come and look at your car, you don't want that to be the first time they've seen the system or the concept or the detail."

Red Bull followed that process, the floor having been approved by the FIA which deemed it legal. Rival teams do not share that opinion and have a different interpretation which they believe outlaws the system.

Red Bull is understood to have run the development since at least the Bahrain Grand Prix, which Sebastian Vettel won. It's believed McLaren sent a letter to Red Bull ahead of qualifying in Monaco though there was not enough time for the Austrian team to make any changes to its cars, even if it had wanted to. Once qualifying began the cars were in parc ferme conditions.

While the threatened post-race protest never came to be, a decision which came about after a meeting between McLaren and Ferrari technical chiefs Paddy Lowe and Pat Fry, it's now been revealed that the matter will be discussed by the Formula One Technical Working Group on Today.

If, from that meeting, Red Bull's floor is declared illegal the team will be forced to change it ahead of the Canadian Grand Prix in two weeks. The decision would not be retrospective, meaning Red Bull would not lose the previous results obtained with the system.