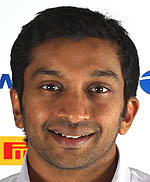 After failing to qualify in Australia, the Spanish team had an altogether better time of it at Sepang. Having made the 107% Q1 cut off with relative ease, Pedro de la Rosa and Karthikeyan both lined up on today's grid, ironically, ahead of Caterham's Heikki Kovalainen who picked up a five-place grid penalty in Melbourne.

At the start of the race, while the rest of the field was on intermediates, the Spanish team put both its drivers on full wets, though de la Rosa started from the pitlane following a fuel pressure issue ahead of the warm-up lap.

At the time the race was red-flagged, Karthikeyan was running tenth, however, once the race was underway again he to became involved in incidents involving two world champions.

A clash with Jenson Button was widely said to be the fault of the McLaren driver, however, a later clash with Sebastian Vettel, which left the Red Bull driver with a puncture, was blamed on the Indian.

Describing Karthikeyan to the German media as a "cucumber", Vettel said the HRT driver needed to start using his mirrors. It was a point with which the stewards agreed, ruling that Karthikeyan had caused the collision, as defined by Article 16.1 of the Formula One Sporting Regulations.

Handing the HRT driver a drive through penalty, imposed after the race in accordance with article 16.3, 20 seconds was added to his elapsed race time, thereby dropping him to twenty-second, behind his teammate.