Fernandes sends out a warning 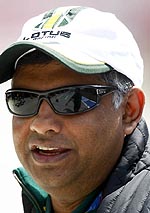 Lotus team boss Tony Fernandes has sent out a clear warning to his team, urging them to improve or else.

Earlier in the day, team boss turned TV pundit Eddie Jordan slammed all three new teams for their lack of progress. It was an attack that clearly stung Fernandes who entered the sport with Lotus last year.

"I noticed some of what Eddie Jordan said this afternoon and I take that sort of comment as a positive," he said in the team's post qualifying press release, "he is not alone in wanting to see us keep moving further up but Rome was not built in a day and our plan has always been worked out over the long-term.

"We cannot rush this," he continued, "and we always knew that securing tenth place in the first two seasons would give us the platform to build for a secure future, so we are on target to achieve that.

"Over the next few weeks we will unveil some more of the plans for next season and beyond, and having seen the development plan for next year's car I am confident the foundations we have laid will help us reach where we want to be. Hopefully in years to come people with the experience of Eddie will be proud of what we have achieved, and we will take his comments as a positive force for us to keep pushing on."

However, speaking later, Fernandes sent out a clear warning that when he said he expected improvements next season he means it.

"Next year is the year where we have to make an impact. If we haven't then I am going to give up," he told Reuters. However, when asked if this meant he would actually turn his back on the team and the sport he continued: "When I say walk away, what I'm saying is we have got to make changes," he said.

"I think if we don't make an improvement next year, if we are still 10th next year, then someone's not doing something right and ultimately I am the leader of this," he continued.

Referring to technical director Mike Gascoyne, he continued: "Mike would be the first to say if he doesn't produce a car that's in the middle of the pack next year, having been given all the tools... I honestly think he's done a fantastic job to get us to where we are but next year is the year where everyone's head is on the block."