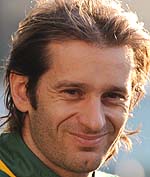 Jarno Trulli: "Despite it being a typical Spa day it was still pretty positive for me. We obviously knew what the conditions would be and had a plan to work around that, so we managed to get through most of what we wanted on the tyres, engine and setup and I think we're ok for quali when it looks like it'll be similar weather. One good point is that we were trouble-free in all the runs today so I think it's important we keep that up all weekend and give ourselves a chance to be in the mix if anything happens in qualifying or the race."

Karun Chandhok: "It's good to have been back in the car and despite the weather I enjoyed my time out there today. I had traffic on what would have been my quickest lap, but the chance to spend more time in the cockpit is always useful and as it was a bit of a stop-start session for everyone I pretty much did as much as I could today."

Heikki Kovalainen: "It's always difficult in weather like this to get anything meaningful done, but we did get out on both the mediums and the softs and have a bit of data from those runs that'll be useful for Sunday. Tomorrow should be interesting - it looks like rain but we've always done pretty well in qualifying in the changeable conditions so let's see what we can do with strategy tomorrow afternoon - whatever happens I'm sure it'll be a good session for the fans!"

Thierry Salvi, Renault Sport F1 Support Leader: "As Spa is one of the most demanding tracks of the season on the engines we always have to achieve as much as we can here on Friday, whatever happens with the weather. The drivers spend a lot of the lap at full throttle, particularly on the run down to Eau Rouge and along the back straight, so we had a runplan for today that was based around the weather conditions that we had and we were able to complete most of the goals we had set ourselves for both sessions. Obviously we could not complete as much mileage as we would have liked, but we were able to work on the wet setup we may well have to use tomorrow, and the dry setup that hopefully we will be using on Sunday so despite the rain it has been a pretty good day for us."

Mike Gascoyne, Chief Technical Officer: "An interesting day with fairly typical weather conditions for this track. This morning Karun did a solid job for us and ran some aero checks early on, but then the rain brought an end to any meaningful running in his session. This afternoon, although Heikki wasn't able to complete his run on the softs we still managed to complete a run on the mediums for him and Jarno did get through some laps on the softs so at least we have banked some time on track on both compounds. Now we will have to see what the weather decides to do in qualifying and the goal for Saturday and Sunday is the same as it has been all season - see if we can push the cars directly ahead and make sure we have a problem free race."

Riad Asmat, Group CEO: "It is good to be back racing and to see that the whole team has come back from the break raring to go. There is a good spirit in the garage and everybody is determined to make sure we work as hard as we can to consolidate tenth place and take whatever opportunities present themselves, particularly on a track like Spa where the weather conditions may mean we can use strategy and a bit of luck to take the fight to the cars ahead."

To check out our Spa practice gallery, click here.