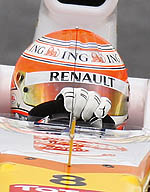 Bernie Ecclestone has revealed that he was "very tempted" to buy Renault's team when the car manufacturer decided to scale back in 2009 but he was prevented from doing so by F1's majority owner CVC.

Writing in the Telegraph, Pitpass' business editor Christian Sylt reveals that F1's new chairman, and CVC co-founder, Donald Mackenzie told him "we just can't." Ecclestone adds "if we owned a team it would cause us trouble. Every time that team was on TV people would say we were favouring it."

Ecclestone says that he would only have bought Renault "to keep it afloat" but in the end this wasn't necessary since Luxembourg-based businessman Gerard Lopez stepped in instead. He adds that he was also "tempted" to buy Honda's team when the Japanese manufacturer pulled out at the end of 2008 but this too wasn't necessary due to a last-minute management buyout led by team principal Ross Brawn.

It was Ecclestone's interest in buying Honda that spurred CVC to tell him that the F1 Group couldn't own a team. Ecclestone's own experience reflected their concern and he says "when we had Brabham Gordon Murray used to say to me that the last people to know what changes are going to be made are us because you never tell us anything."

CVC owns 63.4% of F1's parent company Delta Topco but it has complete control of the business by its directors (who are known as I Directors) having one more vote than those of all the other directors. As it states in the F1 Group's articles of association (the rules which govern the business) this is "to ensure that the I Directors will always have sufficient votes to pass any resolutions of the board."