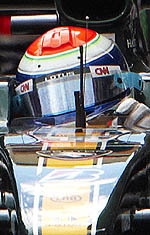 Lotus Racing has officially confirmed that the team will be known as Team Lotus from 2011. The migration from Lotus Racing to Team Lotus will take place over the coming months and the renamed team will be the direct successor to the previous incarnation of Team Lotus when they take to the track in the 2011 FIA Formula One World Championship and beyond. Tony Fernandes and Kamarudin Meranun's Tune Group has acquired Team Lotus Ventures Ltd, the company led by David Hunt since Team Lotus was last on track, and through that agreement now has full ownership of the historic rights and goodwill of the Team Lotus brand and heritage.

Tony Fernandes, Lotus Racing Team Principal, is delighted that the hard work that has been going on behind the scenes to make this acquisition can now be announced, saying: "Kamarudin, Nasa and I are absolutely delighted to have completed this transaction - It's difficult to express just what it means to us to now be able to say we are Team Lotus, one of the most iconic names in any form of sport worldwide, but we have been working very hard to make this dream come true, and today it has. My thanks go to David for looking after the Team Lotus brand so well over the period of his stewardship, and keeping the integrity of Team Lotus together. We are very excited about now taking over the brand and after our first year in Formula One, we believe we are ready to do justice to the legacy we have inherited. These are heady days for Team Lotus, and it will be a very exciting process for the team we have in place to help us achieve our goals, on and off track.

"It was always important to us that Lotus Racing and Team Lotus could be brought together to unite the past and the present, and now we have done so. We have enjoyed a successful first year as Lotus Racing, and our thanks go to Proton, Group Lotus and all our partners for the parts they have played in our year as Lotus Racing. But now we move on to a new chapter, and as Team Lotus we will be an even more potent force, both on and off track. Everyone associated with the team is looking forward to the challenges that lie ahead - even more so now we will be bringing back one of the most loved, revered and respected names in motor racing history. A new dream starts today - Team Lotus is back."

David Hunt, who has overseen the negotiations with Fernandes and his team, has been Managing Director of Team Lotus since 1994. He revealed his feelings about returning Britain's greatest motor racing name to Formula 1, saying: "I'm delighted this day has finally arrived. In January 1995, when I had the simply awful task of making the loyal Team Lotus personnel redundant, I promised them, the fans and the media that somehow we would return Team Lotus to F1 in good order and properly funded. We had no idea of the huge difficulties we would have to overcome when I made that statement.

"Nevertheless, I simply would not allow the legacy of Colin Chapman's extraordinary achievements to die and I want publicly to thank the many loyal individuals who have worked to reach what sometimes seemed an impossible goal. The custodianship of the iconic brand and history now passes from me to Tony, Kamarudin and Nasa. In relinquishing this responsibility I am confident I am handing over to a team who have the financial resources, passion, energy, vision and long-term commitment to give Team Lotus the best possible chance of returning to the sharp end of the grid. I look forward to assisting the team towards scoring Team Lotus' 80th Grand Prix win - that will be the day when all the effort of the past 15 years will finally seem worthwhile."