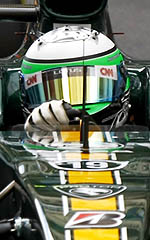 The Belgian Grand Prix at Spa lived up to all expectations and produced an incident packed race that saw Lotus Racing again finish ahead of their nearest rivals. Heikki Kovalainen recovered from a slow start to finish 16th, and Jarno Trulli crossed the line in 19th, a spin late on dropping him back a few places after he had put in a very strong performance in the constantly changing weather conditions.

Heikki Kovalainen: "I had a bit of a problem at the start when the engine bogged down, and I activated the anti-stall, but I was already being passed by the time I could get up to speed. The rain had started and unfortunately I damaged my front wing in the last turn so I had to pit. We took a gamble with the inters but the rain stopped, so I had to come back in and I lost out to the group ahead of me. After that it was a question of doing the best job I could, and keeping us in with a chance of taking advantage of the rain at the end, and as it turned out we managed to pick up a few places at the end and finish 16th."

Jarno Trulli: "It was pretty exciting out there, an eventful race where lots of things happened, but that's normal for Spa! At the start I went wide to avoid Heikki and unfortunately was overtaken by a couple of other cars. After that I was struggling a bit in the early stages with my rear tyres overheating - fortunately they came back so I could started pushing and managed to pull away from the guys behind, so that was a good stint until the rain came. I had quite a big margin over my nearest competitor so I was looking pretty good, but then the safety car came out. At the restart I was following the other cars but obviously the visibility was very poor and I made a bit of an error on a high speed corner, touched the white line with the rear end of the car and it just slipped away from me, which meant I lost places. I continued, but then the race was over from there. I'm glad we got both cars home, and it's good to see we've still got an advantage over our nearest rivals, so bring on Monza!"

Mike Gascoyne, Chief Technical Officer: "An exciting race and a typically eventful one here in Spa. Neither driver had a great start which meant we lost a few places, and Heikki had a problem when the rain started. We changed him onto intermediates, but were then a little slow in changing him back, but he drove a great race, and was quick at the end in the wet conditions, and he again brought us home best of the new teams. Jarno drove a strong race. He struggled initially with the tyres, but in the middle part of the race his pace was very strong, and it's just a shame that he had a spin in the difficult wet conditions as it would have been nice to have had both cars finish ahead of the other new guys. But despite that, both cars finished and overall this has been a good weekend for the whole team."

Riad Asmat, Chief Executive Officer: "I feel great. I think we achieved what we wanted to do - we got both cars home and we're still ahead of the other new teams. It's a bit unfortunate that Jarno spun out, but it's all part of racing. He recovered well and I think we'll all move on from this point and feel confident we can put in a good performance in Monza, and the remaining races. I think the team did great today and there was maximum effort involved, so well done to everyone. The rain of course threw everything out of sync, but we survived it today and we're really happy."