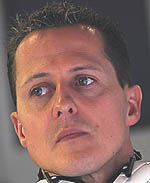 Having qualified a lowly eleventh for his homer race, seven-time Michael Schumacher has hit out at the in-season test ban.

During the era in which he won his numerous titles, testing was almost unlimited, with Ferrari sometimes testing at three circuits simultaneously. However, the drive to cut costs and (allegedly) improve the show means that in-season testing is restricted to simulator work and straight-line running. Even the amount of time in the wind tunnel is restricted.

This is particularly damaging in the case of a team like Mercedes which continues to suffer the same problem as its Brackley ancestors, a failure to work with its tyres.

Ahead of another long, probably unrewarding afternoon, Schumacher has hit out at the ban calling it ridiculous.

"It is completely ridiculous to do zero testing," the German told reporters following qualifying. "Some kind of testing should be implemented. I hope there is common sense and we find a solution."

At the end of a session in which he failed to make it to Q3 and his teammate could only manage ninth, the German continued: "Certainly we are disappointed. Our expectation was to be about fifth or sixth.

"We were not close enough to this and there are reasons," he continued. "If you don't have aerodynamic features, like the F-duct or the exhaust blown diffuser, then you want to implement them, so you develop them at home, build them on to the car and test them on the race weekend.

"Naturally, you have very little time and you end up in some compromises. It's a tough way to fight your way through the development, but as a consequence here and there you have some issues.

"I understand why we have ended up where we are right now," he admitted, "but as it was ridiculous to do 90,000 kilometres more during the year of testing it is completely ridiculous to do zero."