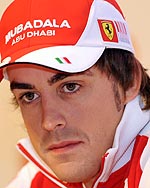 Responding to comments made by Charlie Whiting in the wake of the British Grand Prix, Ferrari has denied they were told to allow Renault's Robert Kubica to re-pass Fernando Alonso.

Ferrari was furious when the Spaniard was handed a drive-through penalty after overtaking Kubica on the grass on lap 16, and claim they sought clarification from Whiting immediately after the incident.

Race Director Whiting subsequently told Italian magazine AutoSprint: "On the radio, I suggested to them that if they exchanged position again, there would be no need for the stewards to intervene.

"We told Ferrari three times that in my opinion they should give the position back to Kubica," he added. "And we told them that immediately, right after the overtaking manoeuvre. But they didn't do that and the third communication they said that Kubica was by then too far back to let him regain the position."

It's a claim Ferrari has vehemently denied, producing a chronological account of events which was published by Gazzetta dello Sport. Ferrari claimed to have radio conversations in which team manager Massimo Rivola asks Whiting "Have you seen the pass? In our opinion there was no room to overtake."

Ferrari claims that Whiting requested time to review the video, and before pressing for a second time just two minutes later. Instead of a decision, Ferrari claims, Whiting suggested Alonso should let Kubica past. Rivola then questioned if this was a formal decision, only for Whiting to respond "No, but that's how we see it."

Alonso had at this point caught and despatched Jaime Alguersuari's Toro Rosso as Ferrari claim to have again questioned Whiting. "Alonso doesn't have only Kubica behind. He would have to concede two positions now," the team asked.

"We have given you the chance to do it or not. Things being this way the stewards will hear the drivers at the end of the race, but I understand your position," came the reply.

Shortly thereafter Kubica pulled his Renault into the garage and retirement, and it wasn't until almost fifteen minutes after Alonso had overtaken Kubica that notice was given that the stewards were investigating the incident. They subsequently made their decision to hand Alonso a drive-through penalty in less than a minute.

Ferrari's point of contention is that two minutes had elapsed during their initial discussions, which the team argues does not equate to "immediately".

"One minute and fifty-five seconds is not immediately," complains Rivola. "This means for two minutes that the race was being held under unsafe conditions."

Alonso's penalty comes hot on the heels of a decision which also went against the Italian team in Valencia, where a penalty on Lewis Hamilton failed to affect the Englishman's race while Alonso, who adhered to the regulations, had his chances ruined. The decision to penalise Alonso was further damaging to the former champ's race as a safety car period was required in order to clean up the remains of Pedro de la Rosa's rear wing. Instead of losing the handful of positions expected under normal racing conditions Alonso found himself at the rear of the field for the second race running.