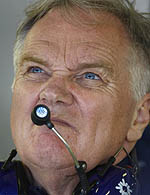 Reports in the German media claiming that Williams is trying to court Volkswagen are wide of the mark, says Patrick Head. The Englishman refutes the claims, though admitting that the door is open should the situation change.

"Frank was interviewed in Bahrain and somehow made a comment that got interpreted as that we were doing something with Volkswagen," he explained. "I have to say as far as I'm aware there's nothing behind it."

Rumours surrounding Volkswagen's involvement in Formula One are not new, though the German car manufacturer has always been quick to dispel such suggestions by saying Formula One is too expensive.

With costs having been reduced, and looking to drop further still, the time may be right for the German giant to enter F1 after enjoying success in other classes, and for Williams, who, after working with the likes of BMW, Renault and Toyota, have reverted to a customer engine, the idea of manufacturer backing is intriguing.

"They're a very capable company," said Head when asked if his team would be interested in partnering up with VW. "If an opportunity arose it would be interesting, but we're just starting a three-year contract with Cosworth so I think it's unlikely."