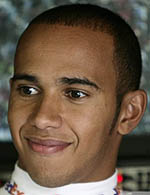 Teamed up with reigning world champion Jenson Button this season, Lewis Hamilton has dismissed talk of possible friction, admitting that he's learned from his explosive season as teammate to Fernando Alonso.

If truth be told, none of us expected Hamilton to be quite as competitive, straight out of the box, on his F1 debut in 2007. The youngster's pace and determination caught all of us by surprise, none more so that teammate Alonso.

As the season progressed and the two-time champion saw his authority within the team being challenged, even if some of it was in his mind, the relationship between the two drivers, and ultimately the team, suffered. At season end the Spaniard headed back to Renault, leaving all concerned wondering if things might have been handled better.

Speaking to BBC Sport, Hamilton has admitted that he handled some things badly in that amazing debut season, but claims to have learned from the experience.

"At the beginning of my first year I was up alongside the two-time world champion and he was seen as the guy to win the world championship and I think at the time I misinterpreted and misunderstood the goals and the understanding of how the team worked," said the Englishman. "But since I've been here they do everything to give us individually the best package possible. I've never had more than the guy next to me, we've always had equal opportunity, which is the greatest thing in a team. It's not easy to manage that, because one guy can be ahead of the other.

"Inevitably people say things sometimes when they haven't done so well," he added. "You say things out of anger; you say things that you potentially don't mean. That's how I see it from the others."

With an eye on the stormy season that was 2007, not forgetting the epic in-house battle when Alain Prost and Ayrton Senna were teamed up at Woking, Hamilton was asked if he foresees problems with his new teammate, 2009 world champion, Jenson Button.

"It's different now," he said. "We've learnt from experiences. We understand each other very well."

Other than having Button using the same equipment, Hamilton faces the prospect of Alonso in a Ferrari and the return of seven-time champion Michael Schumacher.

Clearly relishing of going head-to-head with the German for the first time, Hamilton said: "It's different to having the young Michael, who's building his way up and is at his best. I'm sure he's going to be just as good as he ever has been. It's great for the sport, great for the fans, and for me it's going to be a great experience to have such a legend on the track with us.

"In testing I had a little bit of time behind him, and it was crazy to think, 'This is Michael Schumacher in front of me, wow. This guy's won seven world championships and I've done it once and it was so hard.' To do it seven times is remarkable."