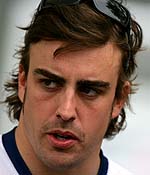 In a surprise move, Fernando Alonso has been ordered to attend tomorrow's extraordinary meeting of the World Motor Sport Council in Paris.

The last minute decision to call him is said to have come as a total surprise to the Spaniard who has repeatedly claimed to have no knowledge of the plan to fix the result of the 2008 Singapore Grand Prix by ordering Nelson Piquet to crash. Only last weekend at Monza, when asked if he was aware of the plan, which effectively gave him the race victory on a plate, Alonso's response was a resounding "no".

Nelson Piquet Snr, who previously claimed that Alonso must have suspected something, if only because of the strategy his team put him on, appeared to backtrack on Friday when he said he was surprised the two-time World Champion didn't question his team's strategy.

While Renault is not expected to offer any defence, it is understood that, among other things, the WMSC intends to question Alonso over Briatore's role. The Italian, who will also be attending the hearing, faces the prospect of not only being banned from the sport but also being ordered to end any management contracts he has with F1 drivers. Then there are his interests in GP2 and GP3.