Briatore claims he quit to save the team 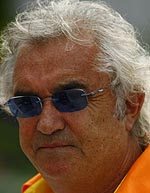 As those inside and outside the F1 paddock try to come to terms with yesterday's announcement - that Renault essentially admits that its F1 team cheated - Flavio Briatore claims to have left the team to save it.

Be they fans or F1 insiders, everyone Pitpass has spoken to remains in shock following yesterday's statement from the Renault F1 Team, in which the French outfit claims it will not contest the accusation of cheating at next Monday's WMSC hearing, and that Flavio Briatore and Pat Symonds have left the team with immediate effect.

While some are shocked by what is said to be the most serious episode of cheating in the history of sport, others are quick to claim that they always regarded Briatore as a slippery customer and are not surprised by the latest revelations.

Whatever happens at next Monday's hearing - and we seriously doubt whether Renault will be thrown out of F1 or even heavily fined, even though the crime is far worse than the spy saga - one can rest assured that it will not be the end of the Crashgate saga. Not by a long chalk.

In the meantime, as we await further information from those involved - now that the leaks appear to have miraculously ceased - Briatore is claiming that he quit the French team in order to save the team.

"I was just trying to save the team," the Italian is quoted as saying by the Daily Mirror. "It's my duty. That's the reason I've finished."

With Briatore and Symonds gone, it is expected that at next Monday's hearing Renault's lawyers while offering no defence to the accusations will simply call for clemency.

However, whatever happens, as we said before, this is not the end of it, not by a long way.