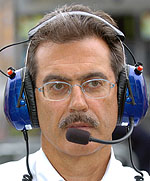 BMW Motorsport boss Mario Theissen has defended the teams' alliance decision to press ahead with its plans for a breakaway series, claiming the FIA's stance left it with no choice.

"Up to the last moment, the teams' association, tried to find an agreement," he said, "but unfortunately the FIA remained unaccommodating and insisted that the teams should enlist for the coming season and only afterwards would the rules be discussed. This approach was unacceptable for us. After all, nobody wishing to buy a new car signs the contract and discusses the price and features afterwards.

"We were accused of not being ready to reduce costs," he continued, "but the opposite is the case. Since its foundation in September 2008, FOTA has advocated cost reductions in Formula One, while increasing its appeal and supporting independent teams. In this short period of time we have achieved more than ever before in the history of the sport. From next year, for instance, an independent team will have to pay just a fifth of what it had to pay in 2006 for its engines.

"Nonetheless, the FIA wasn't ready to agree to the teams' requests. FOTA hasn't closed the door but, nevertheless, we will press ahead with the planning of an alternative new series with the best teams and drivers."