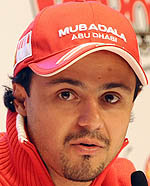 While only ducks were able to conduct testing at Portimao today, conditions at Mugello, where Ferrari was in action, were somewhat better, which meant that, as from late morning, slick tyres could be used.

Consequently, Felipe Massa was able to run on a dry track, accumulating a large amount of data which will be analysed over the next few days. The day's programme ended slightly ahead of schedule, a few minutes before the track was closed, because of a problem linked to the hydraulics, nonetheless, the Brazilian completed a total of 103 laps.

"I am pleased with the way these past days have gone," said Massa. "Finally today, we were able to test the car in the dry continuously. First impressions are positive, even if it is obviously too early to say what level we are at, partly because we had no competitors here to compare ourselves with.

"However, if I was asked to give a verdict on this test, I would score it a strong eight for reliability, given that we have covered over 1500 kilometres. It's true a lot of that was in the wet, but given the conditions experienced in Portimao, I think the decision to come to Mugello was the right one."