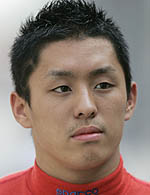 Japanese rookie Yuhi Sekiguchi was handed a 5 grid position penalty after today's feature race in Shanghai when it was shown that he caused a collision with BCN's Luca Filippi which resulted in both drivers having to retire from the event.