When is a limit not a limit? 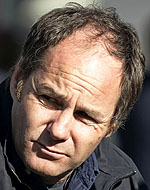 Given that the cap is designed to secure the future of all the teams, sense would say that those who are struggling should have greatest say in the system. Gerhard Berger (right), whose Toro Rosso team could soon be an entirely privately-funded venture if Red Bull sells its stake as it hopes, thinks that the budget cap is being set so high as to be irrelevant.

Berger describes the €175m limit as "madness" explaining "where is the saving then? Neither driver salaries nor engine costs are included in the 175 million. That means that the manufacturers don't want to save anything. A private team cannot afford these sums in a thousand years."

True, the departure of Red Bull is likely to send its chassis costs up but, according to industry monitor Formula Money, this would be around €30m (£23.8m) at most.

Toro Rosso could be an ideal template for the FIA to follow.