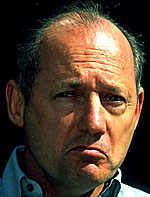 The British newspaper The Guardian is often referred to as The Grauniad. This is because it has a habit (massive understatement) of making mistakes, be they typos, spelling, factual inaccuracies or what have you.

However, unless the newspaper has made a similar mistake today, it appears that McLaren's problems are worse than any of us could ever have imagined.

On the front page of the motor sport section is the headline story ,'New man at the top for McLaren', beside which is a picture of (gulp) Nick Fry. Holding one's cursor over the picture, one is informed that this is Martin Whitmarsh, but we all know better.

While this is grave news for McLaren, clearly marking an end to Lewis Hamilton's title hopes, it is sure to give Ross and the guys at Brackley a major confidence boost ahead of this week's Jerez test.

And in case it's gone by the time you get there...