Did Hamilton press the wrong button? 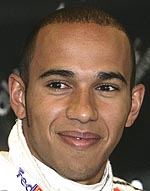 A usually reliable source tells Pitpass that it was not a transmission glitch which caused Lewis Hamilton to slow on Lap 8 of yesterday's Brazilian Grand Prix, thereby virtually ending his championship hopes, but a mistake by the driver himself.

Our source claims that Hamilton caused his gearbox to fail by touching the wrong button (the Start button). As a result he had to reload the system/software. Earlier in the race, another mistake saw the Englishman go wide, losing several positions, as he attempted to make up for a poor start.