Some words of comfort from Fernando 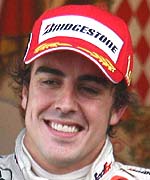 There were times on Sunday when we were seriously considering contacting the Sao Paulo police and reporting Fernando Alonso as a missing person, such was his presence during the Brazilian GP.

Having seen so little of the Spaniard during the course of the race, we presumed that he and his 'fair play Tsar' had gone off to sample the delights of the Brazilian metropolis.

Yet, sure enough, at the end of the race, and with Kimi Raikkonen having (seemingly) won the 2007 title, there was Fernando, grinning ear to ear, rather than wearing the look of despair of a man who has just lost out on the chance of winning his third successive title.

The 2005 and 2006 World Champion maintained a higher profile later in the day, finding the time to tell Spanish radio station Cadena Ser that he would be "mortified" should his teammate win the Drivers' Championship as a result of his team's appeal against the Race Stewards decision relating to the fuel irregularities with the BMWs and Williams.

"Whoever gets the most points is the rightful champion," he said. "It would sink the sport if they won the title this way. I would be mortified if that happened."

Having been excluded from the Constructors' Championship for its role in the spy saga, all that was left for McLaren was the drivers' title, and going into the last race with its drivers heading the championship it seemed a fair bet that the Woking team would not leave Brazil empty handed.

However, Alonso claims that McLaren virtually gifted the championship to Ferrari with its poor strategy. "McLaren got it wrong," he said, "they lost the championship for the mistaken decisions they made in the second part of the season.

It wasn't a very well organised season from the point of view of the management," he added, failing to mention the fact that the team's eye might have been taken off the ball due to the spy saga and the in-fighting between its drivers.

"There was no sensation of being a team," he added, missing the irony, "and the result speaks for itself. Each person will have to draw their own lessons from this season, but if we had taken a different approach we would have obtained different results. McLaren lost and Ferrari did a better job than anyone else."

Although his departure from Woking seems a formality, the two-time World Champion was giving nothing away with regards his plans for 2008.

"The only reality is that I'm under contract to McLaren," he said. "I know there are a lot of rumours but I haven't spoken with another team that 's the reality.

However, when asked if his former team Renault were his number one choice were he to leave McLaren he was adamant: "No," he said, "right now I'd say no."