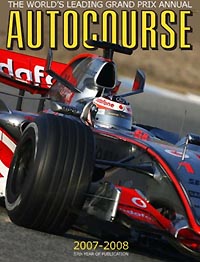 Those of you who buy Autocourse - also known as motorsport's bible - every year, will be aware that it is traditional for the tome to carry a picture of the 'new' Formula One World Champion on its cover.

In recent years, the book has gone on sale earlier and earlier, often before the end of the season, and yet the 'mock up' cover, complete with World Champion, always proves to be correct.

If that is the case this year, Kevin Garside, Ed Gorman and friends might want to book some leave for next week, and have a cool, dark room on standby.

Amazon has today started taking orders for the 2007/2008 edition of Autocourse, and there on the cover - in all his glory - is Fernando Alonso in the McLaren.

Whether Autocourse is correct or not we shall have top wait and see, but the presence of the 'fair play Tsar' is sure to help.

Talking of predictions, we note that Frank Worrall's claim that Lewis Hamilton would win the title in Japan wasn't entirely correct. Then again, didn't Mr Worrall claim that the race was to be held on October.