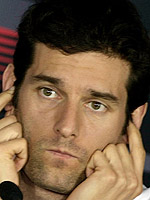 Mark Webber got a bit of a mauling - to put it mildly - form the mainstream British media last week for daring to criticise Lewis Hamilton, namely his actions behind the safety car in Japan.

However, the Australian, who described Hamilton's antics as "shit", stands by what he said.

"I got pretty much slaughtered by the British gutter press about what I said on Thursday in China in the FIA press conference," he writes in his blog for Eurosport-Yahoo, "but I guess that's what happens when you say something negative about the golden boy.

"The fact of the matter is that I said what I said because I thought he didn't do a great job behind the safety car," add the Australian. "He could have done much better, in fact. And, to Lewis' credit, he came out and said exactly the same; first to me and then in public.

"It's easy to be wise after the event, and what he's said doesn't put me back in the race, but that's the way it goes sometimes."

Webber's comments at the FIA press conference came just a couple of hours before race stewards were due to summon the Australian, together with Hamilton and Sebastian Vettel, to review new evidence relating to the Japan incident, namely footage taken from the grandstand on a fan's mobile phone.

Hamilton escaped punishment because of the "exceptionally bad£" conditions, while Vettel had his ten-place grid penalty overturned. That said, the German youngster subsequently received a five-place grid penalty for "impeding" another (unidentified) driver during qualifying.