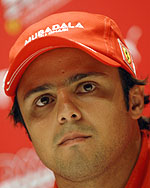 Although he is no longer a contender for the World Championship title, Felipe Massa has not ruled out victory in Brazil next weekend, one year on from his emotional home win.

Writing on his personal blog, the Ferrari driver brings readers up to date on his activities since last weekend's race before looking ahead to Interlagos.

"I am in Sao Paulo, after coming straight from the Chinese Grand Prix," he writes. "I took part in an event here for UNICEF, in my new role as an Ambassador for UNICEF here in Brazil. I took part in a go-kart race with a lot of children from poor backgrounds. It was a very nice day, with some media in attendance to generate some interest in UNICEF's work here. It will be interesting for me in the future to try and give some help to the large numbers of poor here in Brazil.

"In Formula 1, everyone is very lucky to have a good life," he continues, "to have had a good education and to be involved in something we enjoy and to have the opportunity to try and make a success of one's life. However, if you see the problems some people have, it brings home the importance of doing something about it. It only needs you to do very little to help a lot of people. For me that is a great thing and I am happy to have started this involvement with such a worthwhile organisation.

"As for the racing, obviously the last two Grands Prix in Japan and China were not so great for me and after the first of those two races, I accepted the fact that I could no longer be in contention for the Drivers' title, having to leave the fight to the three guys I have been battling with all year long. One aspect that has become ever clearer with every passing race is that qualifying and especially the ability to get a position on the front row of the grid is the most important key to the win this year with everything being so closely matched. In the end, neither of those two races produced a nice result, but in the difficult conditions in which they were run, it is always going to be tough with an element of luck playing its part.

"Now, my focus is on the seventeenth and last race of the championship. If you look at all the elements of my season, the pace I showed, the results I obtained, the wins, then the overall outcome was a positive one, even without the title. Now, I say to myself let's try and finish the championship in a fantastic way. The fact I will not be fighting for the title does not really change anything for me about my home race. It is a very important race for me on a personal level and we need to do the best we can to win, as I do in every race. But this is my home race and the final one of the year which adds something to it. Once the season has come to an end, it will be time to focus already on next year and to concentrate on starting and finishing the 2008 championship at the right level."

While McLaren will have an FIA appointed 'fair play Tsar" ensuring that there is no naughtiness, no in-team nobbling, Felipe admits that he is fully prepared to assist his teammate's championship aspirations.

"At Interlagos, I will be trying to win the race. For sure, Kimi still has a chance of winning the championship, even if it is a small one and it will be difficult. My personal target is victory, but if we see any possibility of helping the team to win the Driver's title, then of course I will be doing what I can. But this is not the way to approach the race weekend. The best way to approach it is to do what I have done at every race which is to think in terms of winning the race. If the miracle happens and maybe both McLarens are nowhere, then me and Kimi could finish first and second respectively and still give Ferrari the result it wants. There are so many possible permutations of what could happen that it is not worth thinking about all of them now. Of course the team will have done the maths for every possible situation.

"Between now and the Grand Prix at Interlagos, I actually have a free weekend coming up," he adds, "but then, as from Monday I have a lot of promotional, sponsor and media work as part of the build-up to the Brazilian GP. It's going to be a tough week, ending with all my family and friends coming to the track over the weekend. I'm looking forward to it: it should be a very nice way to end the racing year."