Mosley thanks Alonso for his assistance 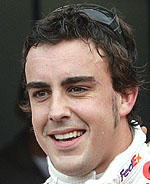 Ron Dennis' comments earlier today confirmed that he did indeed advise the FIA that new evidence was available relating to the spy saga following a confrontation with Fernando Alonso on the morning of the Hungarian GP.

In recent days there have been rumours doing the rounds claiming that Dennis contacted Max Mosley after Alonso allegedly demanded number one status within the team, telling the McLaren boss that unless his demands were met he would go the FIA.

Today's comments from Dennis and indeed Mosley appeared to confirm that this was true.

However, in a further twist to the saga, Mosley has now thanked Alonso for his actions, essentially providing the evidence that condemned his own team.

"Without Alonso we wouldn't have known what had happened," the Gazzetta dello Sport website quotes Mosley as saying. "He was the only one on his team who did the right thing. Until that moment we only had the communications provided by the Italian police but no certainty, which however we obtained with Alonso's e-mails."

Speaking at the post qualifying press conference, Alonso refused to talk about Mosley's comments, however, he told reporters that he is confident that there will no change in the attitude of the team towards him and that it will continue to treat him and Lewis Hamilton as equals.

"I am not concerned," he said, when asked if he thought the team might favour Hamilton. "They always said they will do the best they can to win races and to help both drivers win races and championships. It's the way it is going now so I am not worried."

Meanwhile, just in case the Woking boys should feel inclined to put a 'spanner in the works' after the Spaniard brought the inquisition to its door, Max Mosley sent out a firm warning.

"If they do anything wrong against Alonso, they will have to answer to us in Paris and we will do what is necessary," he said.