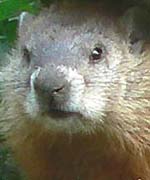 Ahead of today's second free practice session the air temperature is 29 degrees C, while the track temperature is 48 degrees. It's cloudy, but the sun is clearly up there somewhere.

Robert Kubica will be keen to get to work this afternoon, the Pole having only completed two laps in the first session due to a fuel leak which subsequently caused his F1.07 to catch fire back in the BMW garage.

The lights go green, and first out is Schumacher, followed by Albers, Kubica and Sato. Liuzzi, speed and Trulli follow on shortly after.

Schumacher posts the benchmark (21.240), but not before a close encounter with a groundhog who runs across the track at the end of the main straight. The little thing comes to a halt and allows the Toyota driver to pass. Clearly it's not just cats that have nine lives.

Webber goes quickest in all three sectors, going straight to the top of the timesheets with an 18.615. Liuzzi goes second, ahead of Schumacher, Speed, Barrichello and Sato.

Alonso is on track, and as in his first run this morning, he gets out of shape and takes to the grass. Moments later there's a beautiful slide from the Spaniard, he just catches it.

Thing is, here, for the most part, drivers can get away with such mistakes, for this isn't Monaco. Then again, Montreal does have the 'wall of champions'. The replay of that slid is even more spectacular.

Wurz goes cross country as Alonso tries to improve on ninth, all those slides and excursions having taken their toll on his lap time. Elsewhere, Hamilton is on track, and quickest in the first sector. The Englishman goes second behind Webber, as Alonso improves to third, ahead of Fisichella and Liuzzi.

As he attempts to improve, Hamilton misses the final chicane, the track still very 'green'. Meanwhile, Kimi Raikkonen goes sixth with a 19.664.

For a moment it all appears to be over for Kubica. The Pole spins the BMW at the second chicane and the car comes to rest against the barriers but facing the wrong way. If it was a movie stunt it would deserve applause. However, gets the car going again, spins around and continues. Phew!

After fifteen minutes Webber remains quickest, ahead of the McLarens, Fisichella, Massa and Button.

Ralf goes off at the first corner and is lucky not to collect Nick Heidfeld as he rejoins the track.

Liuzzi goes fourth, only to be bumped down moment later by Barrichello, who posts 19.064.

The new rear wing on Webber's Red Bull is like a coffee table, it's so flat. Nevertheless, it's clearly doing its job, as the Australian improves with an 18.181. Second placed Hamilton is 0.515s off Webber's pace.

Alonso sits in his car in the McLaren garage, the Spaniard looking oh-so-calm as he watches his monitor.

Albers, currently sixteenth, sets a personal best in the first sector. The Dutchman, running on the supersoft compound, fails to improve and remains 1.9s off the pace.

As Michael Schumacher watches from the pit-wall, Raikkonen goes second (18.463), with teammate Massa slotting in right behind in third (18.571).

It's all over for Trulli, who appears to have smacked the wall, damaging the right front of his car. Nonetheless, he slowly drives his car back to the pits. At the same time, Ralf climbs out of his car, which clearly has a problem. It would seems that Gordon the groundhog's good luck didn't rub off on Toyota.

While that was going on, Fernando Alonso went quickest, posting a 17.329. To consolidate McLaren's obvious strength here Hamilton goes second (17.613).

A replay shows that Trulli didn't hit anything, his suspension broke as he rode the kerb. Apologies to the Italian.

Heidfeld, currently twelfth, is on a good lap. The German sets personal bests in the first two sectors, finally crossing the line at 18.524 to go seventh, behind Massa, who has just improved to sixth. Elsewhere, Albers complains of problems with his traction control, he appears to be getting too much of it.

As Webber gets as close to the wall of champions as one would want to get, Alonso goes quickest in the first sector. Unfortunately, he is unable to maintain the pace and fails to improve.