A1 Team Brasil will begin tomorrow's sprint race at the Zandvoort circuit from the eighth row of the grid, after nominated race driver Tuka Rocha (right) had a challenging first shot at A1GP's innovative four-part qualifying session. It was a disappointing grid slot for the team after Tuka had a strong final free practice session this morning, finishing fifth in the standings.

The A1GP qualifying format comprises four 15-minute sessions, separated by five-minute breaks. Each driver is limited to one flying lap per session and has to record at least two times. The two fastest times for each driver are then combined to form an aggregate time, from which the grid is formed.

Starting the first segment on old tyres, Tuka set his first flying lap with a time of 1:31.998. He did a much better time on his second lap, which he set on new tyres, putting in a lap of 1:29.045, which turned out to be his best time. In the fourth segment he ran again on new tyres and set his second best time of 1:29.373. Unfortunately, on his first time driving in one of the A1GP qualifying sessions, Tuka wasn't able to put in the two perfect laps required to secure a high grid spot, and so he will begin tomorrow's sprint race from 16th position. The sprint race will get underway at 11am local time.

Tuka Rocha: "I don't really know what to say. This is definitely not the kind of result we were expecting or are capable of. The car felt a bit better than in practice and our lap times did improve but we still have some hard work to do before tomorrow on the set-up. The first set of new tyres was quite good, there was more grip than I expected and the car felt easy to drive. But on the second set, there wasn't as much grip and I had understeer. I was pushing so hard that I ended up making a couple of mistakes. Tomorrow I will just have to do a good start and try to do a good race."

A1 Team Canada racer, Toronto's James Hinchcliffe, kept the Canadian entry at the sharp end of the field in qualifying today securing eighth on the grid from the 23 nation field ahead of tomorrow's opening round of the 2006-07 A1GP World Cup of Motorsport, Sunday 1st October, at Circuit Park Zandvoort, Holland, the open-wheel racing series entering its sophomore season pitching nation against nation across the globe in identical 550bhp V8-powered A1GP cars from October through to April.

Hinchcliffe (19), despite his rookie status, proved to be the man to beat in yesterday's official practice where he topped the timesheets for A1 Team Canada. Sampling A1GP's aggregate qualifying system this afternoon for the first time, where each driver has four timed runs with the fastest two laps combined to set the grid order for the Sprint race, James' challenge was to make the most of the three new sets of tires available to him.

Straight out on fresh runner he posted a 1m29.079s on his first run only to go better on his second outing on the same set, this time setting a 1m28.641s. Faster still over his next two runs, both utilizing a fresh set of Cooper's, his aggregate time of 2m56.307s places A1 Team Canada eighth on the grid for tomorrow's 20-minute Sprint race, where points are awarded for the top six nations, before the afternoon's 70-minute Feature race takes place with points awarded through to tenth. Pole today went to A1 Team South Africa with Formula Renault Euro Cup regular Adrian Zaugg behind the wheel.

James Hinchcliffe: "I think given it was my first shot at A1GP qualifying things didn't pan out too bad. I'm obviously new to the one-lap format and I struggled a little to get up to speed on my first run and how to get the most from the tire straight away. There's definitely still some more to come from the car and myself but for a first effort in this series a top-eight grid slot's pretty decent. I'm used to rolling starts as that's the norm in North America so I'll be prepared at the start of the Sprint race but the key is to steer clear of trouble so you're in good shape for the Feature race in the afternoon!" 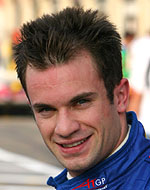 A1 France will start on the second row for the first sprint race of the opening round of the season.

After making smooth progress yesterday in the preparations for the first round of the 2006/2007 A1 GP World Cup of Motorsport at Zandvoort, Nicolas Lapierre (right) continued to work on developing a suitable chassis balance for the qualifying session in the final Official Practice on Saturday morning.

In the afternoon, A1 France claimed 3rd position on the grid for Sunday's sprint race. The 22-year-old French driver achieved his best times respectively in the third (1.27.931) and fourth session (1.27.757) that brought his final aggregated time to 2.55.688.