FIA to take no action against Briatore 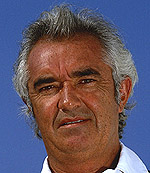 According to a report in the Italian magazine Autosprint, the FIA will not be taking any action over comments made by Renault boss Flavio Renault following Fernando Alonso's grid penalty at Monza, when the Spaniard was adjudged to have interfered with - or rather, impeded - Felipe Massa.

Referring to the comments made by Briatore, when he compared the incident - one of several involving the team and its star driver this season - to the recent scandal that rocked Italian football, Mosley admitted that the comments were made in the "heat of the moment" and would consequently not be punished.

"Both let their emotions get to them," said Mosley, referring to Briatore's comments and those of Alonso, who, amongst other things, claimed that F1 is no longer a sport. "The FIA can only punish if the quotes damage the image of the sport, and I don't believe this happened in this case."

The atmosphere at Monza following the grid penalty was intense, and Pitpass has heard of one British journalist who, convinced that the championship was being manipulated, promised to carry out a physical attack on (FIA technical delegate) Charlie Whiting when he saw him. The comments made by Briatore and Alonso reflected the general mood in Italy, and any (re)action or punishment would be unthinkable, and would only further taint this year's championship, which, to all intents and purposes, has already had its image damaged.