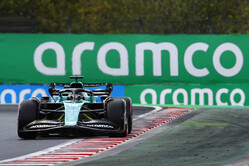 My favoured dynamic duo continue to stalk the pages of Pitpass.

The Doc and Marty had the kind of duo magic most of us can only dream of. Lennon and McCartney, Chip and Dale, Nureyev and Dame Margot, French Fries and Mayonnaise, Michael Schumacher and Ferrari, Automotive progress and a flat-plane crank V8, 88 mph and a flux-capacitor.

Thrice thee make me laugh! Seriously FIA and Liberty, there are only so many ways in which to paint the lipstick upon the pig before blurring the photograph to try turning Elsie the sow into Elle the Super Model.

Circus Maximus did not sell tickets by convincing Romans to enjoy a day off from flogging servants and barbarians in equal measure. Circus Maximus did not tell them that what they really needed in their lives were sustainable chariots with four or six environmentally aware horses coupled, via a recyclable harness, to a vegan driver. All horses run on 100% green grass. Nope.

Circus Maximus had a simple line; come see lunatics race like mad men with a massive chance of injury, death, ignominy or heroic immortality in equal measure. Place a bet, drink too much cheap grappa, eat a few questionably sourced animal chunks, then go home and vomit in your own aquarium! That's how you enliven a first century AD soul! See the human spirit in full flight! Question the insanity of such racing! Then go home, and live your own life a touch brighter for the experience, possibly sparing the servants an evening beating in a case of sharing the love. Played right everyone is a winner!

More duos... Dave Navarro and Jane's Addiction, another fine coupling for those that like that sort of thing. While the band never quite made explicit what precisely Jane was addicted to, be it alternate rock, fast living or questionable substances, Dave had many personal demons to slay with his own addiction battles.

So, via curious duos we arrive at the motorist and their motor. A coupling that since the early 1900's has transformed personal transport, working life, the sprawl of suburbia, the rise of the mega-mall and the road trip. It is quite reasonable to suggest the motor car has been a highly transformative and impactful device. Loved, hated, revered and reviled in impassioned equal measure, the automotive beast can be the finest of its art-in-motion kind, or the most exhausted, yet still running, Trabant. Each has an impact and generates a range of emotions for driver, passenger, and passer-by.

What unites them all however, other than the early steam cars, is Petroleum Spirit, not teen spirit. Which measured, first by carburettor, then by mechanical injection, and now by computer controlled jets, injects life into the engine, or as F1 prefers to call it these days, the internal combustion unit, or ICU.

From Ford's first flat-head V8 for the masses released in the Model 18 of 1932, to V12 Ferrari units of the 1950's with pistons the size of thimbles, to the ICU locked within a matrix of technology deep within the carbon-fibre exoskeleton of a modern F1 car. Each is lifeless until the elixir of Petroleum Spirit is injected into their craving veins to address their personal Jane's addiction.

The modern motor, which I consider any road going car built post the lead-free fuel mandate. The mandate varies by country. Japan introduced lead free fuels in 1972, fully banning leaded fuel in 1986. Other western countries drifted into lead-free during the 1980's. Leaded fuel was only fully banned in Europe in 2000. It had been added to fuel all those years to aid the octane rating and reduce the chance of knocking in an engine. Knocking results from poor, premature, combustion within a cylinder, wasting fuel, reducing power and, over the longer term, damaging the engine. It was a problem in early cars with mechanically simple engines and poorly refined fuels.

Thomas Midgley of Standard Oil was responsible for pushing tetraethyl lead as an addictive substance for craven engines. He was our first main dealer, backed by General Motors, and Standard Oil, via their joint venture the Ethyl Corporation. Years before Big Tobacco would tell us all their research was proving cigarettes to be safe, Big Oil was keen to use lead as an additive, insisting it was harmless, despite it killing workers producing it on a regular basis.

It all came to head with a safety hearing held after Midgley had spent time recovering from acute lead poisoning in Florida. The first production line for tetraethyl lead had already been shut down in Ohio due to multiple worker deaths. Another plant in New Jersey, which had also seen workers die, had been named "The House of Butterflies" due to the insect hallucinations suffered by workers.

Yet Midgley cheerfully assured the US Surgeon General that; "...the average street will probably be so free from lead that it will be impossible to detect it or its absorption". Before under questioning stating that; "...no actual experimental data has been taken".

So it was that at this safety hearing we had Frank Howard, VP of the Ethyl Corporation note that; "...continued development of motor fuels is essential to our civilisation". While the counter argument for public health was presented by Dr Alice Hamilton (seriously dear reader, how ironic this family name appears in such focused places these days), who pointed out that in all instances of lead use or refinement, lead poisoning was sure to follow. She was simply following a line of reason commenced by Vitruvius some 2,000 years before, when he noted that: "Water conducted through earthen pipes is more wholesome than that through lead. This may be verified by observing workers in lead, who are of a pallid colour."

So dear reader. Big Oil. An alternate, Ethyl Alcohol, will perform more or less the same duty in petroleum as Tetraethyl Lead, but without back-stabbing your brain cells while doing it. Why did Big Oil not push this solution? Possibly because any old red neck farmer can distil it and patents and lovely rivers of money do not then flow. There is a body of research that links high lead content in the environment to violent crime rates, but that's an essay for another day.

Midgley? Why having fought the corner for leaded petroleum he went on to develop chlorofluorocarbons (CFCs) for refrigeration and thus, having attacked all our minds, and lungs, commenced to destroy the ozone layer... Way to go Thomas!

For those that believe in karma, it's worth noting that in 1940, at the age of 51, Midgley contracted polio, which left him severely disabled. He subsequently devised an elaborate system of ropes and pulleys to lift himself out of bed. Sadly, in 1944, he became entangled in the device and died of strangulation.

So, Porsche want to see more synthetic fuels in F1, and one presumes elsewhere. Why?

Dear reader, look at the story above. Look at the story of Big Tobacco. The Philip Morris share price is close to a twenty year high! These big companies do not have our best interests at heart.

Big Oil wants each of us to continue our Jane's Addiction. There is no money in each of us possessing an electric car capable of 1,000 kilometres (call it 650 miles) on a single charge, with the charge coming from our own solar, wind, geothermal and hydro resources. As the dear Doctor Mike Lawrence would state... "Follow the Money!" There is no money in renewables and electric cars for the Big Oil cartel.

Consider for a moment LIV Golf, a new Golf series recently started by the Saudis. Cracked me up when I learned that "LIV" is supposed to be read as the Roman numeral for "54" (for those that do not know, current championship Golf is played over 72 holes, while LIV has reduced this to 54). For those who can count, our numbering system is based on "Arabic Numerals". You know. 1, 2, 3 the whole gang including zero, created by Arabic scholars. Yet now the Saudi wealth fund is using Roman numerals to massively move into the Golf universe. Why so?

...hold faith dear reader... IBM sold all its laptop and hard-disk patents and know-how to Lenovo some years back. People laughed at IBM for selling the farm... Then solid state memory, iPads, Tablets and smartphones all took off... and not a hard-disk in sight. IBM knew. They knew. They sold moments before "Peak Hard-disk" so they made a fortune and moved into a service provision model.

The House of Saudi knows we are within moments (plus or minus) of Peak Oil. Their Government investment funds and ARAMCO (the state oil company) are divesting faster than a crack-powered escort shedding clothes on a super yacht because they know what is about to unfold. Oil is history, and Big Oil, and some car manufacturers, are trying to milk the last joys of the feast from fatted cows set to explode. Companies chased profit over health for tobacco. Companies chased profit over health for leaded petrol.

That same mind-set, for they live on like vampires, is now working to delay a transition to electric vehicles as long as humanly possible. They want each of our personal Jane's Addition to continue as long as possible, regardless of the cost to us, at significant benefit to them.

Green Hydrogen? I laugh at you! Synthetic fuel, which (and I quote) does not release more than it took to produce (like what the heck does that even mean?), I throw Flux-capacitors in your liquid face.