Mazepin to race under neutral flag 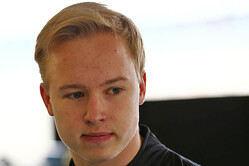 A ban on Russian athletes competing in world championship events means that Haas rookie, Nikita Mazepin will race under a neutral flag.

Following the revelation of state-sponsored doping at the 2014 Winter Olympics in Sochi, late last year the Court of Arbitration for Sport (CAS) passed the ban recommended by the World Anti-Doping Agency (WADA).

However, whereas WADA had called for a four-year ban, CAS reduced this to two.

As a result, when (if) the Olympics go ahead this year, Russia will not be represented, though a number of Russian athletes have opted to compete under a neutral flag.

This week, the Russian Automobile Federation admitted that the CAS ruling will apply to Russian drivers competing in motorsport world championships, including F1, WEC and WRC, though not F1 which is not a world championship.

Though they cannot mention the word 'Russia' or show the Russian flag, drivers can still use the colours - red, white and blue - that constitute their national flag.

Should the Russian Grand Prix go ahead, the national anthem will not be played before the race or even - in the very unlikely event - should Mazepin win.