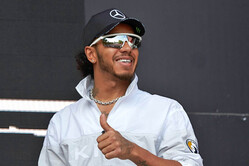 Is there anything Lewis Hamilton can do wrong at present?

With a seemingly unassailable 73-point lead at the top of the 2019 Formula 1 standings after a surprise win in Sochi's Russian Grand Prix, it's been revealed that the Stevenage-born star has featured in a film produced by Netflix about the need for balanced nutrition - not in F1 but tennis, of all sports. Hamilton is involved in the production due to being inspired to turn vegan two years ago by Serbian tennis ace, Novak Djokovic.

Hamilton took to his official Twitter account to confirm that he was an executive producer on the film titled 'The Game Changers'. Hamilton said that "performance is everything and it all begins with having the right kind of fuel in our bodies". The five-time F1 world champion also paid tribute to Djokovic's lifestyle and preparation, praising his commitment to doing "that little bit extra" that others "are reluctant to look into". Given Djokovic's improved consistency in 2019, it's unsurprising that he has returned to the summit of the men's tennis world rankings, putting him in pole position as the leading contender for London's ATP World Tour Finals in the latest futures markets at FOX Bet.

Many people are blissfully unaware that Hamilton is a staunch champion of ethical eating. However, if his business plans come to fruition, he could be the person to help put veganism firmly on the mainstream map. Hamilton has launched a vegan burger restaurant in central London, with ambitious plans to launch an additional 14 franchises worldwide over the next two years. The chain, which will be known as Neat Burger, features a menu of exclusively plant-based food that are "sustainable, healthier and ethical". 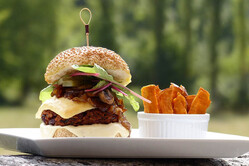 Hamilton and the brand's chefs have worked at close quarters with a Los Angeles-based vegan food manufacturer, Beyond Meat, to help define their menu. There are three staple components of the Neat Burger menu - "the neat", "the cheese" and the "chick'n". Patrons can also choose to try a vegan hot dog, along with skinny and sweet potato fries. As someone who insists they are "passionate about being kinder to [the] world", Hamilton coming up with a vegan concept that encourages more people to go meat-free every so often should be applauded.

Showcasing the effectiveness of vegan diets in professional sport

'The Game Changers' is directed overall by Oscar-winning Louie Psihoyos, as well as fellow Oscar winner, James Cameron. The premise of the overall movie is to create a big-screen document of the "explosive rise of plant-based eating in professional sports". The film premiered in theaters worldwide in September for one night only and has since been made available for viewing on iTunes. It is due to reach Netflix's on-demand streaming platform in mid-October.

The film has been one of the most highly-anticipated documentaries of 2019. James Wilks, who wrote the film alongside Joseph Pace, admitted that it has been "an incredible amount of work and stress" for the entire production team. Nevertheless, he believes the documentary will appeal to a broad audience, whether it's people interested in the impact on the wider environment, animals or performance levels at the pinnacle of professional sport.

Even journalists sceptical about the benefits of leading a plant-based diet are promising to tune in to watch 'The Game Changers'. Controversial British reporter Piers Morgan met Patrik Baboumian on his UK breakfast television show, 'Good Morning Britain'. Baboumian, who is widely regarded as the World's Strongest Vegan, was on the programme to demonstrate just how strong a human can be despite 'going vegan'. Morgan believed that any strength Baboumian held must have been "residual" from his meat-eating days - some 14 years ago. So impressed was Morgan at Baboumian's powers that he committed to watching 'The Game Changers' to see whether he would reconsider his stance towards veganism.