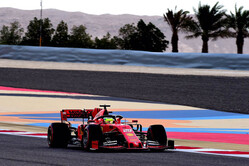 Hard to believe but though situated in the desert, heavy rain compromised the first day of in-season testing in Bahrain today, with drivers losing around four hours of track time.

Such was the unexpected nature of the conditions that there were no wet or intermediate tyres available to allow some wet running, consequently the track remained silent, much to the frustration of those race fans who had stayed on after Sunday's Grand Prix, and the teams and drivers seeking to make the most of an already limited test schedule.

While the timesheets show that Max Verstappen posted the fastest time and Lewis Hamilton completed the most laps, the headlines will be all about Mick Schumacher, son of the legendary seven-time world champion Michael Schumacher, who was making his F1 debut with his father's old team, Ferrari.

Like the rest, the German was sidelined for much of the afternoon, but eventually he posted a 29.976 to go quickest, albeit on the softest rubber available (C5). Shortly after however, Max Verstappen posted a 29.379 on his preferred C3s.

Also attracting the media's attention was Fernando Alonso, the Spaniard back in an F1 car just months after walking away from the sport. The Spaniard, at the wheel of a McLaren, was on duty for Pirelli as it began its tyre testing programme for 2020.

This morning's pace-setter was Romain Grosjean, who on Sunday retired after just 16 laps, his second retirement of the season. By close of play he had slipped to fourth in the standings, Lando Norris, who was only on duty for McLaren this afternoon, having taken over the MCL34 from Carlos Sainz, posting a 30.800 to go third.

In total there were 15 drivers on duty today, Daniil Kvyat, like Alonso, on duty for Pirelli, while McLaren and Williams split driver duties.

While there was talk of extending the session due to the lost time, it was eventually decided to end it as planned at 18:00 (local time).

It is not anticipated that there will be any further downpours tomorrow, the final day of the test.

"It was a little bit wet," said Verstappen, "which is strange, but overall I think we had a good day. We managed to get in a lot of laps to help us understand more about our performance over the race weekend, and I think we've already learned a lot, so that's very positive.

"We don't get that many days to really understand the car, and during a race weekend it all goes by so quickly, so days like today are very helpful. We knew what didn't work over the weekend in terms of rear-end grip so we tried to work on that and I think we learned a lot."

"Today was a little bit of a strange day due to the rain," admitted Simon Rennie, the team's Group Leader, Simulator Engineering. "Tyre choices for testing are made quite a long way in advance and with a limitation on the number of sets to choose from, everyone naturally went without intermediates or extreme wet tyres, as probability suggests there won't be heavy rain in Bahrain in April, and yet here we are!

"Still, despite losing about four-and-a-half hours due to the weather, we managed to get through all of the high priority test items on the run plan for today, so I think we can mark it down as a good outing.

"We focused on taking forward some of the things we learned from the race weekend here in Bahrain and that meant a lot of aero tests, and a few mechanical items as well. To be honest, it was a fairly straightforward day for us, with no reliability woes and a lot of data gathered.

"Depending on the weather, it will be more of the same tomorrow when Dan Ticktum takes over from Max. Dan has plenty of simulator experience under his belt, so I don't expect it to take him to too long to get comfortable with the RB15 and hopefully we'll have another productive day."

At Ferrari, Schumacher, who made his Formula 2 debut over the weekend with the Prema team, jumped in the SF90 for an installation lap, before pitting for the usual checks. A few minutes later, despite the track being extremely dirty following the sand storm that hit the area yesterday, he began his first run, putting together a series of laps at a constant pace.

Before the lunch break, the young German had completed 33 laps, the quickest in 1:32.552. In the afternoon, once the rain had cleared, he completed a further 23 laps, as he gradually gained confidence, while working on a programme including tyre and set-up work.

"The emotions I can tell you were really nice," said Schumacher, who will drive the Alfa Romeo tomorrow, "it was feeling like home already, it was beautiful to make those first laps and to see all those guys working on the car and working with me.

"It was astonishing, the feeling I had going out and the first time on the throttle was… this thing has so much power!" he grinned. "I felt good and there is so much potential in the car with the speed through the corners and in traction it is hard to describe and I am sure there is a lot more to come.

At McLaren, Sainz initially experimented with various aerodynamic configurations and set-up on the test car, including running with "rake" sensor equipment, before the rain arrived. Norris took over the car for an exploration lap with 80 mins remaining, the track a combination of wet/damp/dry, before conditions improved.

It is hoped that improved weather conditions tomorrow will allow the McLaren test car to recover lost time in terms of mileage.

Alonso, driving an F1 car for the first time since the Abu Dhabi Grand prix last November, was the first car on-track. As per the regulations, his MCL34's specification used an aerodynamic set-up previously utilised in a race as he evaluated 2020 tyres.

"It's been a difficult day due to the unexpected weather conditions," said Sainz. "That meant the run plan was a bit stop-start the whole morning and I couldn´t complete all of my programme, but still managed to do around 60 to 70 per cent of it.

"We have some things left we want to cover, and hopefully the team can recover those tomorrow. It's been quite a surprise to see some rain in Bahrain!"

"I only planned on doing half a day today but because of the weather, we didn't manage to do as much as we'd hoped," said Norris. "That wasn't just me though, a lot of other drivers were affected by the same thing. It was just one of those days really, which was a bit unfortunate, but I don't think we lost out too much.

"A lot of what we tested today were smaller things to test rather than the more important items. Moving forward, that's more for tomorrow.

"I only did three runs and a bit of a start practice, the track was still damp for the first one so not a lot of it was as representative as we wanted. I still got a read on one or two of the tests which were relatively important to give feedback on, so the things that we needed to complete, we managed to do. All in all, it went well."

"Today was a positive day," grinned Alonso. "It's always fun to drive a Formula 1 car as they are the fastest cars in the world, so as a driver it's nice to feel the speed and the adrenaline. Even with the rain in the middle of the day it was a good day.

"The car is a step forward in every aspect from last year," he continued. "The car has more grip, it's less draggy on the straights, the engine is a step better, so overall as a package the car is going in the right direction and we're closer to the front.

"We saw in the first two races that there is still another step to make if you want to compete with the top three teams, but as a first step I think it's a good baseline and there's a good programme of development.

"It was good to see a positive weekend for us in Bahrain last weekend and hopefully this continues for the rest of the season. I have no regrets about my decision to stop racing in Formula 1 and I'm very happy for the team."

"Not much to report really," said Gil de Ferran, "as the rain disrupted our test plan somewhat. Nevertheless, we were still able to complete a useful programme with both Carlos and Lando.

"It was great to see Fernando back in the car, he was immediately up to speed and back to his old self! As planned, he also provided us with valuable feedback. On to tomorrow, when hopefully the weather won't play such a big part in the day's proceedings."

At Haas, Grosjean had completed 42 laps in the morning before the rain halted proceedings. The French driver set his fastest time, a 1:30.982, on the C3s, subsequently topping the timesheets prior to the near five-hour rain delay. His time stood until late in the day, eventually placing him fourth fastest among the 15 drivers participating.

Fittipaldi strapped in for the final 75 minutes of the session, taking to the still-drying track he worked through a shortened test plan running used C3's.

Fittipaldi will drive the VF-19 on Wednesday morning with Grosjean returning in the afternoon to conclude the second and final day of the test.

"Surprising conditions today, we weren't expecting to see rain," said Grosjean. "We did what we wanted to in the morning, which is good. We had a program for the afternoon which we couldn't get to due to the weather conditions. Hopefully we can do that tomorrow.

"Clearly we want to understand why we were lacking pace in the race on Sunday, and to achieve that we need some dry weather. We've got some good ideas, some good test items, so that's the plan for tomorrow."

"It was good to get out there," added Fittipaldi. "Conditions were a bit damp, but it allowed us to get some running in as the track was drying.

"That was good for me to get ready for tomorrow. We stayed on used tires this afternoon, I was able to do some longer runs and get more comfortable with the car. I felt good, so I'm looking forward to driving again on Wednesday."

Check out our Tuesday gallery from Bahrain, here.