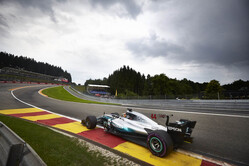 Lewis Hamilton: It's great to be back! Today felt like one of our strongest Fridays so far this season. The car felt strong all-round straight out of the box. We made some good steps with the set-up right from the start of FP1, which is a really encouraging way to kick off the weekend. It looks tight at the top on the long-run pace, but we've started the weekend in the best way possible.

Valtteri Bottas: Overall, it was a tricky day. We had some trouble setting up the car and I didn't feel too comfortable in the beginning. But in the end it was getting better, we made quite big steps. The performance of our car in general is looking good; however, there is still a lot of margin to optimise the car. The long runs in the end were interrupted by the rain, but that was obviously the same for everyone. I'm glad that we at least got a few laps in with high fuel.

Andrew Shovlin: The car is working pretty well, the drivers are quite happy with it on a single lap. The day was obviously affected by the rain at the end of the second session. We were not expecting it early on but then as the session progressed you could see the weather coming in. So we were trying to bring the programme forward a bit, as other teams were too. That has left us missing a bit of tyre data that we would normally have. We had new power units in the car which have been signed off well and we also brought our low-downforce package for this circuit which has performed in line with expectations. Overall, the drivers are reasonably pleased with the car but there are a few more unknowns than normal. We will work hard overnight to try and improve the car and fix the few issues that we've found in terms of the handling today.