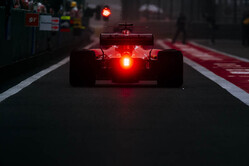 Three laps in the first session, none in the second. Rain and fog, or more accurately smog, meant the medical helicopter was unable to fly, so that Friday's practice was effectively cancelled. In the morning, Seb Vettel went out on track just twice, once with the extreme wet tyres and once on intermediates, just to get an idea of the track condition.

Kimi Raikkonen did a single lap on the extreme wets, but there was no point in doing more. In the afternoon, the entire field stayed in the garages, with the circuit in constant contact with the Shanghai city airport, but as landing there was deemed impossible, the start of the session was repeatedly delayed until there was no time left as the finish time of 15.30 approached.

Sebastian Vettel: "A shame about today, especially for the people who came here to watch, but what else could we do? Over the past few days, there have been so many fans and so many messages from people saying how delighted they were with the result in Australia. Let's see what we can do tomorrow and let's hope we have the right set-up, otherwise it will be difficult. However, I'd add that I'm confident we can do it and tomorrow the weather will be better."

Kimi Raikkonen: "Today we learned nothing: after the installation lap we wanted to go back out on track, but the session was interrupted. It's a shame, but it's the same for everyone. You can't change the weather and sometimes things like this happen. It was not an ideal day, but even if we had run today, it would have been in the wet and tomorrow it's not due to rain. So we must wait and see what the weather will be and how things will go."