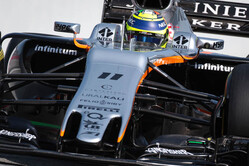 While Felipe Massa was telling reporters that his retirement - which lasted all of 49 days - meant "eating more and getting fat", Sergio Perez was revealing quite the opposite problem.

Like all drivers, the Mexican has to watch his weight, however when Force India discovered the VJM10 was overweight it was the driver who was called on to shed some load.

Like many, while he hadn't gorged himself over the winter break, he had bulked-up in order to be better prepared for the more physical demands of the 2017 regulations.

"I tried so hard to lose weight in the last couple of weeks since Barcelona," he told reporters. Obviously I increased my weight from last year purely by training harder, putting on more muscle, but I was on an extreme diet all last week and still now until Saturday.

"I am all the time very hungry," he sighed, to a bunch of largely unsympathetic journos. "As much weight as I can lose, the better it will be for us."

Perez said the issue of car weight had come up at Barcelona, but the team would only find out properly in Australia just how much it needed to lose.

"We haven't weighed the car actually, because in testing you have a lot of sensors and things on the car," he admitted. "Right now, considering that I lose two kilos or three since Barcelona, then probably we might be quite close."

The Mexican remains hopeful that in the not too distant future, the VJM10 will find a way of shedding a little weight of its own n order to ease his pain.

"I think the weight, sooner or later we will be on it," he said. "If not this weekend, then latest by Bahrain, so I don't think that is a big issue."

It's a widely held view that 5kg of added weight is worth around 0.2s a lap, which leaves Fernando Alonso looking to shed around 75kg.