Brawn: We're seeking to steer the sport to a better place 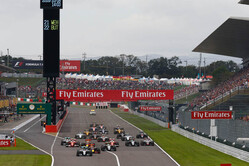 It isn't just the cars that will look different when they take to the track over the next couple of weeks.

At a time we are promised a more aggressive look and even some retro liveries, when the F1 circus pitches tent in Melbourne late next month a few familiar names will be missing from twelve month earlier.

For a start, the old ringmaster, Bernie Ecclestone has been replaced, with Chase Carey now calling the shots, aided and abetted by his technical and commercial gurus, Ross Brawn and Sean Bratches.

Other than it's much anticipated retro livery, McLaren will look decidedly different, with Ron Dennis pretty much airbrushed out of the picture and Mansour Ojjeh and the Bahrain Mumtalakat Holding Company now appearing to be seeking a more prominent role, certainly judging by the press release relating to Ekrem Sami.

It's ironic that the opening race takes place in a park, for a number of high profile people are currently tending their gardens, though most should be in situ by the time Melbourne comes around.

Before then we have the two pre-season tests and one avid observer will be Ross Brawn who is aiming to spend time with team bosses as he not only gets an idea of what everyone wants from the sport under its new management but how that might best be achieved.

Having been on the other side of the fence, he is aware that he'll be in for a hard time, for while all might want improvement it is how we get there that will see the fireworks, for while there is talk of levelling the playing field in terms of competition, reducing spending and ensuring the minnows get a bigger slice of the cake, Planet Paddock has long played host to the F1 equivalent of the NIMBY... though in this case it is not so much as 'Not In My Back Yard' but NAME (Not At My Expense)... either in financial terms or performance wise.

"There are some straightforward issues that we recognise, but the solutions are going to take some time," Brawn admitted to BBC Radio.

"I think the message is that we are fighting the corner to make the sport as entertaining and as viable and as economic as we can for the future," he said, aware - having been there - that what might look good in theory will scare the living daylights out of those who pretty much got their own way under the old ownership.

"I hope with the continued pressure that we can apply, we can steer the sport into a better place. The teams I have spoken to have been very positive about the changes, and very optimistic about the future," he concluded. "So it's encouraging."

Brave words from a man who knows what a monumental task lies ahead of him.