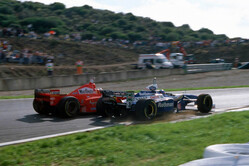 Despite his pedigree and his obvious talent, in recent years Jacques Villeneuve has become something of a rent-a-quote.

Should certain sections of the media want a world champion eager to criticise a driver, team or rule change, Jacques is your go-to man.

At a time F1 is haemorrhaging TV viewers and fans in the stands, unhappy with a sport that has lost its direction, the 1997 world champion claims that the sport went wrong when it listened to the fans.

“Where F1 went wrong was when it started listening to the fans," he told - wait for it - an audience of fans in Birmingham, "because the fans complained there was not enough overtaking.

“By listening to that, what did F1 do?" he continued, "it put in DRS. Because that way we’ll have a hundred overtakes in a race. But name me one overtake you remember since DRS. You don’t, because you don’t see the driver work. In a motorbike race, sometimes it takes a rider ten laps to overtake another rider, but in these ten laps you see the work that goes with it. When the overtake happens, wow. All these ten laps you’re on the edge of your seat.

“Now you aren’t," he said of F1, "next straight line, press a button, overtake. That’s it.

“You want to see a great competition," he continued. "You want boxers to really hurt each other, and see who the strongest one is. You don’t want them to have big gloves so they don’t hurt themselves. That’s a bit what DRS is like, let’s not take a risk, let’s press a button. It’s like overtaking on a highway. You don’t actually see proper racing because of that. You get tons of overtaking, but it’s boring. So it defeats the purpose."

Yes Jacques, the fans did want overtaking, they still do, but it wasn't the fans who asked for DRS.

Indeed, for as long as anyone can remember fans have called for one thing, less aero grip and more mechanical grip. But since when did the sport listen to their opinion?

DRS is another in a long line of gimmicks dreamed up by the sport's powers that be in an attempt to give fans whet they insist the fans will come to enjoy, not what the fans actually want.

Fans - and let's not forget Jacques, they are the customers - don't want gimmicks such as DRS and are all too aware how artificial it is.

Sadly, as the powers that be insist on turning what was a sport into entertainment we are likely to see more such nonsense which will ultimately only do more damage to the sport and lose more fans.

While the sport's prospective new owners talk of all the changes they are seeking to make, such as having the teams buy in to the sport, making races a week- long event like the Super Bowl, exploiting gambling and increasing the number of races, we have yet to hear any serious suggestions as to how the core product - the racing - might be improved.

So don't blame the fans Jacques, they're the poor suckers who have had to watch helplessly as their sport has been bled dry and turned into a high-octane soap opera, it is the powers-that-be that stand accused of destroying the sport, those who have no idea of passion or history only self-interest.