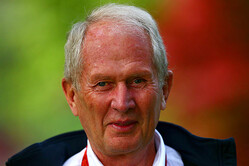 It comes as no surprise that Red Bull's 'Lord High Executioner' believes the sport needs a strong leader, a dictator.

Amidst falling viewing numbers and sponsors, indeed, a general decline in the sport, not helped by a lack of competition, failure to address fans concerns and a general loss of purpose and direction, F1 has been increasingly in the firing line from all angles.

In recent months even the drivers have joined in, publicly calling for an overhaul of the sport's "obsolete" and "ill-structured" rule-making process.

Without a hint of irony, Dr Helmut Marko, Red Bull's motorsport consultant and wielder of the most unforgiving axe in sport, agrees.

Asked by the official F1 website whether, as Bernie Ecclestone has frequently said, the sport needs a 'dictator' as opposed to being run by a committee, he said: "One hundred percent yes... but it is difficult to find one these days!"

The Austrian fears that the teams have too much power and that they need to be kept in check.

"Of course it is difficult to take that away from them again. Probably not before a new Concorde Agreement. The teams should focus on racing again. Things will become better again when the teams are stripped off their power."

Even if that means stripping Red Bull of some of its power?

"Yes, if the right people are running the sport," he responds.

Asked to supply a job description for the next 'dictator', he replies: "I don't think that we will find that all in one person as we now have it with Bernie.

"You need a shrewd businessman, you need a marketing whizz who has the knowledge of the sport and brilliant political connections. Probably we are looking for a ‘Swiss Army knife' who has everything needed for survival!"