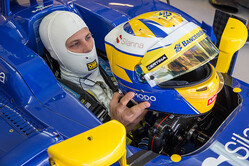 This week the Sauber F1 Team is travelling to Sochi on the Black Sea Coast, which was the home of the 2014 Winter Olympics, for the second Russian Grand Prix. The team's freight, which is around 35 tons, has already arrived in the paddock at the Sochi Autodrom. The Sauber C34-Ferraris were transported directly by air from Nagoya to Sochi.

Marcus Ericsson: "Last season the Russian Grand Prix was my last race both with Caterham and for the year. Qualifying wasn't so bad, and then I also had a decent race. So I have good memories of this track. Hopefully the second Russian race will be a positive weekend for me with the Sauber C34-Ferrari. But we have to work hard to optimise our updates that we have brought to Singapore, and try to make them work even better. And, of course, our aim is to score points again."

Felipe Nasr: "The track in Sochi is again another circuit on which I will drive my first laps in a Formula One car. But I know it from last year's GP2 races. I have quite good memories from this weekend after finishing one of the races on the podium. The circuit itself is a bit of a mix between a permanent and a street track. It is impressive that it has been built in the centre of the Olympic Park, which makes it an interesting environment. The circuit itself consists mainly of low and medium-speed corners. Therefore, braking stability as well as traction is very important. During the weekend we will continue to work on evaluating our aero package."

Giampaolo Dall'Ara, Head of Track Engineering: "The circuit in Sochi, which was new to the calendar one year ago, is regarded in our team as one of the kindest on the tyres due to its special surface, the absence of very high speed corners and the cool ambient temperatures. On this basis, Pirelli has chosen the soft and supersoft compounds, as opposed to the medium and soft that were used one year ago: it will be interesting to reassess what that means for the car's set-up and race strategy. The track itself runs through the park used for the 2014 Winter Olympics and is, to a large extent, surrounded by walls, yet it can't really be considered a typical street circuit. The straight-line performance, traction and braking dominates the first and the last sectors, whereas the middle one is more technical and requires the drivers to find their rhythm through the flow of the corners."