Ferrari to apologise for post-race incident 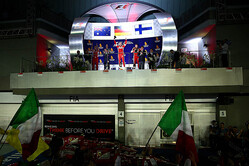 A team representative was summoned by the stewards after a number of crew members pushed past barriers and marshals in order to be below the podium for the post-race ceremony.

The stewards subsequently received a complaint from the secretary of the event on behalf of himself and members of the security contingent at post race parc ferme, that members of the Italian team failed to obey instructions of the relevant officials and behaved in an inappropriate manner.

Accordingly, the team representative for Ferrari has offered to have team principal Maurizio Arrivabene send a written unconditional apology to those who were affected and to give an assurance that there will not be a recurrence.