Green talks about the VJM08 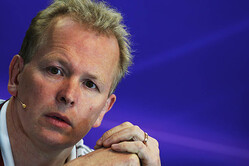 Though it didn't appear until the final pre-season test, and even then only on the second day, thus far the Force India VJM08 has impressed. Over those two-and-a-half days, the car completed 1,055 miles, albeit with a best time over 2.1s off the pace.

"It is a redesign that involved a lot of work over the winter, as the new regulations caused a loss in terms of downforce and we've been working to claw back all that performance," he says of the look of the car. "There are also some more subtle changes, like a modified sculpting of the sidepods and new cooling intakes.

"The differences are not just on the surface," he continues. "Underneath the skin there is a completely new rear suspension layout with a new hydro-mechanical system replacing the original torsion springs. This will allow us to explore new setup configurations for the rear of the car and will allow set up changes to be made much more quickly in the garage. Put simply it's another tool for our engineers to use trackside during race weekends."

Asked about the philosophy in designing the new car, he admits: "The challenges we had to face were very different compared to 2014. Obviously, last year we had a completely new power unit and technical regulations so there was a huge amount of work going into just getting the car to the first race. This year, our focus is mostly on refining and developing the package we had in 2014. We are looking forward to building on what we learnt in 2014 about the VJM07: we understood the car's strengths and weaknesses and we aim to build on the former and fix the latter. This has been the goal for building the VJM08."

Rather than use its own windtunnel, which it is claimed was responsible for the team's drop in form in the latter stages of last season, the team is using Toyota's facility in cologne.

"Working solely in the TMG wind tunnel will help our development significantly," says Green, "having the ability to run 60% models will represent a significant step forward in fidelity of the data we receive and will in turn improve our correlation between the wind tunnel results and the on-track car data. The model itself has a significant increase in aerodynamic loading and it has been a challenge designing and building a new model in a very short time frame.

"The tunnel, however, is not the only course we are taking to improve our performance," he continues. "We are also looking to step up our simulator programme in order to deliver a 'state of the art' tool that will help us develop more in the virtual world and allow us to explore new directions and developments. The combination of the new wind tunnel and simulator will also be aided by the ramping up of our CFD capabilities; we are now operating with 30 teraflops of computing power - a massive change compared to the 0.3 teraflops we had five years ago. We expect the fruits of this investment to start feeding into the development of the car throughout the 2015 season and beyond."

So, despite the lack of running, certainly compared to its rivals, how does he feel the Barcelona test went?

"Being able to run the car in Barcelona was very important and it allowed us to get a first understand of the machinery," he says. "It was a successful test in which we covered 365 laps without suffering any reliability issues, which is a very positive result as we look ahead to the first race. We were able to collect a lot of information that will help us from both an engineering and design perspective as we work towards finding the ideal set-up for the car and we start on the development pathway we have planned."

One of the big rule changes for 2015 sees the number of power units available reduced from five (in 2014) to four.

"I don't expect that to be an issue," he says. "We effectively ran four power units only on Nico's car last season, as the fifth only did 17 laps in Austin. Mercedes HPP have delivered a competitive engine, as they did in 2014, and in that respect and we are looking forward to running with the new spec power units in race conditions. Our working relationship with Mercedes-Benz is now in its seventh year and I am looking forward to strengthening our links with them: just as with our driver line-up, consistency is a prized asset in Formula One."

Asked if there are any other changes that impacted the creation of the VJM08, he says: "There are some subtle construction changes on the Pirelli tyres that will affect the rear of the car and a lot of work in winter testing has gone into examining these differences on track throughout the winter in order to establish any new setup variations resulting from them.

"There are also a few new partnerships which will bring advantages to the VJM08. We have started running Koni dampers: we worked previously with their technology in 2009 and it was important to us that we created a technical partnership in this area in order to have access to their damping technology expertise. We enter our second season with Motegi Racing and, after a successful first season we have worked with them closely to develop a new wheel rim designs for 2015. We anticipate these updates will arrive early in the season and should represent a good step forward in capability.

"Throughout 2015, we will be looking forward to bringing updates to the car from start to finish; the first significant package should be at the beginning of the European season and it will be the first batch of upgrades based solely on the work done at the new wind tunnel."